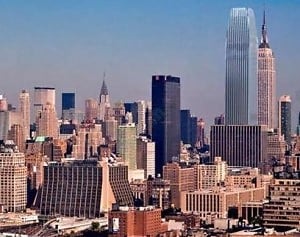 A battle is raging over plans for a building two blocks from hallowed New York ground. No, not that one. This zoning fiasco concerns plans for a tower that would go up in the shadow of the Empire State building and nearly overshadow the city's most famous skyscraper.

Vornado Realty Trust has big plans for the Penn Station area. How big? The company's proposal for 15 Penn Plaza, at 34th Street and 7th Avenue, includes an office building that would climb to 1,216 feet, just 34 feet below the 79-year old Empire State Building.

The City Planning Commission approved the the plan, even though it would be 56% larger than what local zoning ordinances normally allow. Apparently, the thirst for high-density development near major transit hubs like Penn Station overrides the need for restrained growth. Still, the neighborhood's Community Board 5 did not give Vornado the green light. 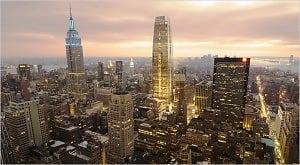 Empire State Building owners Anthony E. and Peter L. Malkin ran their rendering of the building, above, in a full page Times ad urging the proposal's rejection. Vornado fought back with their own considerably more flattering rendering, right.

Frankly, I'm not crazy about either of them. The debate over 15 Penn Plaza has inspired the usual talking points about New York development, and whether the city's constant evolution is an essential part of, or threat to, its vibrancy.

David Greenbaum of Vornado echoed that, saying "the fact is, New York City's skyline has never stopped changing, and I certainly hope it never will."

But the Empire State Building is unique as an icon and for standing just slightly apart from what Michael Lewis called the "gregarious huddle of skyscrapers at Midtown." Lewis wrote that about the Twin Towers one week after 9/11.

As another real estate furor erupts near Ground Zero with Park51, and One World Trade Center (fka the Freedom Tower) eventually supplants the Empire State Building as New York's tallest, it's clear that the changes Greenbaum describes are often messy and sometimes involuntary, even if they're inevitable. When it comes to the Empire State Building, it's worth keeping some things the way they are.