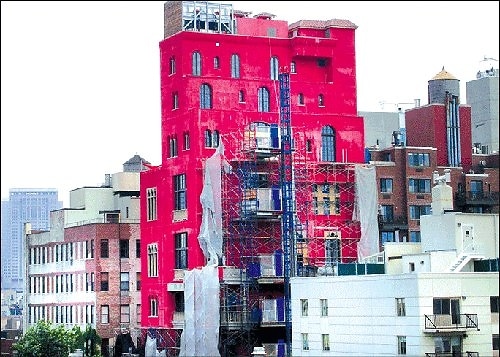 Most of the socialites who frequent Rose Bar probably know of Julian Schnabel as the designer of this posh spot.  Or perhaps they know of his daughter, Stella Schnabel, the "curator" of art at this Gramercy Hotel haunt.  But real estate aficionados know him as the creator of the ersatz Italian Palazzo in the West Village, known as Palazzo Chupi. An artist with substance, its unfortunate that he has overplayed his hand with Chupi.  Even with countless shoutouts in Vanity Fair from Graydon Carter and other social pals, the units won't sell.  So for those of you who are not familiar with this pink tower, we offer you a brief history:

Chupi is to an Italian Palazzo as Sanka is to Coffee.  In its short life, the paint has already begun peeling off at a rapid rate consistent with the decline of its own listing price and the Dow Jones Industrial Average. But it's not what's on the outside, it's what's on the inside right?

Schnabel first went the for-sale-by-owner-route.  Being the social animal that he is, he has amassed a large rolodex of high-powered friends.  But after showing it to all of them, everyone passed (including Bono who was rumored to be seriously looking) except for Richard Gere who took the bait.  But after closing, now Gere himself has said "No Thank You" and has been hawking his place ever since.

Having no luck, Schnabel turned to a broker and now has offered the Palazzo up to the masses.  He's even had open houses, however, it seems no one wants to show up.  A tipster said the following about the most recent open house:

I went to the last open house, and when I got there towards the end of open house hours, there was a table with bottles of wine.  Julian had to open a bottle.  That told me something about interest in the place.

Its already been racing around the real estate world that the triplex penthouse at the top of Chupi has as of October been "chupichopped" (in the words of curbed.com) to $27million down from its intial asking begging price of $32million.  And again, what was once described by curbed as "appropriately absurd", can now only be described as "absurd" in this market. Expect more chupichops to come.

Schnabel has financed the whole place himself, placing himself on the hook.  A guy who has always appeared in the past to be in the right place at the rigth time, it seems like his timing this time around has been a bit off.  Canvas is probably a safer bet, no overhead, no headaches, etc.

Conclusion: People have been ridiculous in the past, and it has been said that you can never lose money underestimating the intelligence of the general public.   At $27 million dollars, however, Schnabel has hyper underestimated our intelligence, and unfortunately for him this is one social situation he won't be able to manipulate to his advantage.