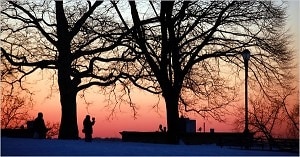 Pinning down New York's next "hot" neighborhood is a competitive sport. And for every prediction that misses the mark (remember the buzz around SoBro?), there's one that gets it right (the Times magazine placed its bet on Bushwick a year or two before mainstream hipsters rechristened it East Williamsburg). Could Sunset Park be next?

I'm basing this on two things, but hey, you want to stay on top of this sort of development before it completely saturates the local press. First, the Times published a Sunset Park edition of its Metropolitan section's "Local Stop" feature online Wednesday. Here's the gist:

Of course, I've written before how bowling is the biggest hipster retro craze since cocaine and mid-hunger strike bods. The piece goes on to mention signs of development:

"Old meets new on Fourth Avenue, where modern condominiums are cropping up next to buildings from the early 20th century."

There are the outraged commenters from the 'hood:

"Sure, as if we need more hipsters in my neighborhood. NYT is too expensive for the regular Joe, but keep writing articles like this and more YUPPYS will move in and less natives will be able to afford rents but you’ll sell more of your papers."

"Yep – looks like the NYT has targeted another Brooklyn nabe and is sending in the first wave of hipster/yuppie shock troops on a scouting mission...Enjoy the diverse ethnic variety of today’s Sunset Park now folks. It won’t be around much longer. Today it’s tacquerias and noodle shops — pretty soon it will be locovore vegan restaurants and latte/chai shops."

Then there's the email I got this morning announcing the location of Blkmarket Membership's (itself primed to explode after a fawning New York profile) latest midnight-to-noon techno dance party extravaganza in, you guessed it, Sunset Park. I'd go, but the need for shuttle buses to and from Bushwick (the usual site of these warehouse bashes) might be a bit much for all but the most intrepid techno heads.

Still though, with views like the one picture above, I'm surprised the "pioneering" moneyed types haven't already invaded Sunset Park.

I guess the Garment District will have to wait its turn.