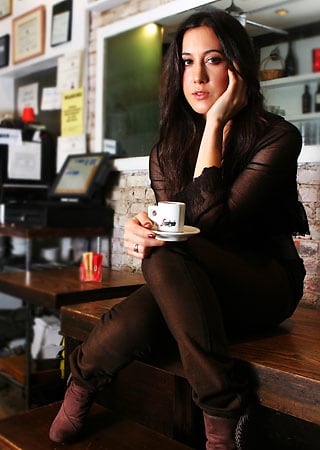 Vanessa Carlton isn't lying when she sings "Making my way downtown" from her hit "A Thousand Miles". She does in fact make her way downtown quite often to eat at her favorite afternoon place: Ruby's in Nolita. She STOLE this place from us! Ruby's has always been a love of ours, and now, we fear it may be RUINED. We're not sure how many of her fans would actually care to see the place after hearing it's her fav on NYMag (or that many even read the magazine), but did she HAVE to go and write a song about it???

"In her single “Nolita Fairytale,” Vanessa Carlton sings about her love of “Ruby's in the afternoon”— a reference to her favorite neighborhood hang. “It’s the best people-watching,” she says of Ruby’s. “Everyone looks like they’re out of an editorial shoot for some hip magazine. But it’s not posey.”" (Grub street).

Maybe part of the reason she is so fond of the quaint restaurant is because of who runs it. The Australians....the people from the same country that are her biggest fans. Her first single ("A Thousand Miles") was most popular in Australia, reaching #1 on the charts first there before anywhere else. If you want, you can read all about Ms. Carlton's diet in the Grub St. post, which includes a lot of pomegranate, yogurt, and vodka. Oh and Sunday nights at "Beatrice Inn as usual."

In regards to her comment on Ruby's: Vanessa, everyone looks like they're out of a shoot for some hip magazine, because everyone IS hip that goes there....until now. Thanks.