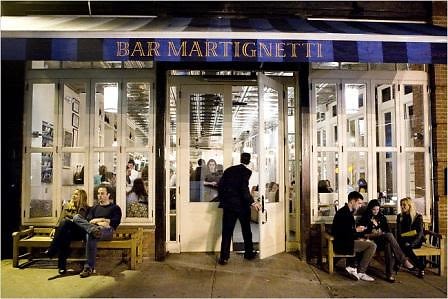 Anthony Martignetti, one of the burly prepster brothers behind the succesful Bar Martignetti's, is now feeling a bit of the burn after going the page 6 route for his new club called Upstairs above Cafe Bari.  That's right, the cat's out of the bag, Anthony and Tom are part of the crew behind the sceney "secret" hot spot.  Having built Martignetti's (aka "Netti's") on the laid-back-preppy-vibe, a style that Dorian's created and the boys Martignetti perfected, Anthony is deeply regretting the hiring of famed celebrity A-list promoter Danny A to promote Upstairs.

This “secret” above Cafe Bari down the street from “Netti’s” is no longer a secret (Micah Jesse is even getting in)…and Anthony is PISSED.  He INSISTS that he and his brother did not get into the business to get laid or become “too cool for school”, and now Danny A is keeping him up at night as he ponders the future of what should have been a logical extension of Netti's.  Anthony himself recently said in the Observer “We’re not going the page six route, we’d never date a Hilton or an Olsen. Never at all.”

Well Anthony, you already did, and you better figure your shit out sooner rather than later.  This winter, Danny A managed to ruin Door in one month.  Hiring Danny A to keep your establishment laid back and unpretentious is like saying that you stay in shape by smoking.