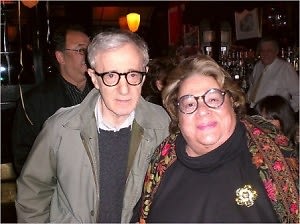 Elaine's, the legendary Upper East Side literary saloon, has been dealt a blow: as the New York Post reports, Elaine Kaufman, the joint's owner, died this afternoon. The occasion marks a worthy glance at the history of the establishment... Woody Allen has been a staple at Elaine's for years (In his "Manhattan," the first scene after the montage takes place at the restaurant) along with countless luminaries. Kaufman originally catered to young writers and starving artists at the 88th and 2nd location, which was long considered too far Uptown to be frequented by any established person.

A coterie of literary buck-shots like Norman Mailer and George Plimpton emerged as regulars, along with Andy Warhol and actors like Jack Nicholson and Michael Caine.

Elaine's die-hard A.E. Hotchner, who wrote the book "Everyone Comes to Elaine's: Forty Years of Movie Stars, All-Stars, Literary Lions, Financial Scions, Top Cops, Politicians, and Power Brokers at the Legendary Hot Spot," provides an excellent condensation of the city's movers-and-shakers who have frequented the place over the years.

The place has been a dining home, literary salon, and watering hole for Jackie O., Truman Capote, Frank Sinatra, Liz Smith, and Joan Rivers, and the anecdotes are ripe, as retold in the book: how Jackie O.'s came to dance; how Mia Farrow, Sinatra's ex-wife, asked Michael Caine to introduce her to Woody Allen, how George Steinbrenner couldn't enter the restaurant when the Yankees beat the Mets in the Subway Series.

The loss of the restaurateur marks the end of an era for a New York gone-by, one of a small-time, family-owned restaurant alchemized into a salon of great influence.