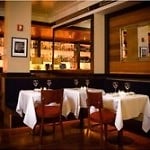 As of yesterday Jour et Nuit has closed its doors. This favorite hotspot of GuestofaGuest was home to many Monday night Rockband parties. It was the brainchild of twin brothers Derek and Daniel Koch, who began their restaurateur tutelage at Le Bilbouquet.

According to the horse's mouth, business was thriving and was not the reason for the closing, but rather a constricting and costly lease dispute with their landlord that has dragged on in the courts since JEN's inception.

Daniel and Derek say that they are "looking at many different options, which include possibly moving to a new location, or building a new space with a similar concept." We wish Daniel and Derek the best of luck, we will miss JEN, but we know these talented doppelgangers will have an awesome swanky new space in no time.