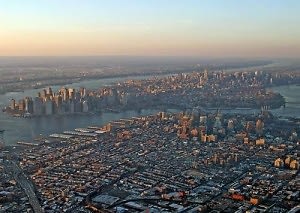 People in the restaurant world are notoriously short-tempered. But it's usually the profane, chain-smoking chefs and protective restaurateurs who blow gaskets. Now, New York food critics are joining the fray. And the source of contention is a timeless one: Manhattan vs. Brooklyn.

Vogue critic Jeffrey Steingarten fired the opening salvo in a Grub Street interview where he accused the New York Times of a Brooklyn bias in its restaurant reviews.

"I find it a very dangerous thing to be a Brooklyn booster. It's dangerous for friends of mine who work for the New York Times - I’m not naming any names - but the food editor for the magazine, who is one of our best food writers, and the restaurant reviewer of the newspaper all live in Brooklyn, and they are relatively uncritical of things in Brooklyn..."

Of course, the names of Christine Muhlke and Sam Sifton don't need to be named for anyone with a basic knowledge of the local dining scene. Even if Eater is pretty sure Muhlke lives in Manhattan. Regardless, the assertion got people talking. And heated!

There were anonymous Eater commenters:

"There is no right answer to this. It's true that the Brooklyn food scene is overblown, but Steingarten is the least credible person to make this an issue. He's a fossilized bitch who lives in a bubble."

"shut up you fat slob"

Then Sifton himself fired back on Diner's Journal, dismissing any sort of hometown (or borough) favoritism:

"Are we? Really? Go mess around with the search function at nytimes.com, starting with a record of my bylines, and see what you come up with. After spinning though it just now, I think it’s probably fairest to say we’re fans of the delicious in whatever guise and borough it comes. (Though, jiminey crickets, we could take a few more runs through the Bronx and Staten Island!)"

OK, so this battle is a bit too refined, excessively gourmet, for behind the scenes restaurant wars. Steingarten and Sifton have so far avoided nervous breakdowns shakily broadcast over Twitter from the Allen & Delancey kitchen. And they've yet to drop a David Chang-style F-bomb or 30. The "discreet," polite argument, wrapped in compliments, is almost as quaint as the Manhattan-Brooklyn divide that inspired it.

Following a recent revival of the borough battle in terms of nightlife, it's somehow comforting to witness the indomitable debate. If only because it reminds us that, despite some appearances, Manhattan and Brooklyn can still be distinguished, and loudly rooted for.