Since 2007, New York has lost two classic neon and chrome diners, the Moondance and the Cheyenne, to Wyoming and Alabama. Last week came the unwelcome news that art deco gem Empire Diner was up for lease, leaving its future up in the air. And that came on top of the Odessa Diner scaling back its once 24/7 schedule to close at 2am on weeknights. This is a trend that needs to stop... 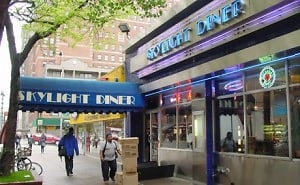 There is no type of restaurant more New York than the diner. They might not get the mainstream critical praise heaped on the city's gourmet wallet-busters. And self-regarding foodies rarely genuflect before diners the way they do for obscure, far-flung ethnic gems. But every major city in the world has these kinds of eateries, though few rival the gluttonous, chair-buckling abundance of New York's offerings.

WHY WE LOVE DINERS:

1. Diners, like New York, are democratic: It's safe to say that no diner has ever taken a reservation. A diner with an unlisted phone number probably just doesn't care enough to have a phone number at all. And if a diner does have a table hierarchy, it is likely limited to booths versus tables, window seats versus counter stools. If seating decisions are not decided by first-come, first-serve, they are usually a matter of choice.

2. Choices, Choices, Choices: Speaking of choice, diners not only let you choose from often food spanning several continents, but leave it to you to determine which meal you scarf down in the first place. Pancakes at midnight or a burger at sunrise--it's up to you. In a city whose residents have 500 galleries to choose from before a Saturday art stroll and 40 delivery menus in their apartment to skim before deciding on dinner, the embarrassment of greasy riches at the local diner is no less appreciated for being expected.

3. Historic Landmarks: Diversity in diners extends beyond menus to ethnic flavor. The best of the old school diners reflect the history of their neighborhoods with off-the-boat waitstaff and Old Country oddities mixed in with the turkey clubs and scrambled eggs. The substantial Ukrainian population in the East Village has led to what seems like a local ordinance requiring diners to specialize in pirogi. And although diners have long been associated with Greek ownership, the ones in Astoria (aka Little Athens) are the real, Cycladic deal.

4. Service. What we want when we want it: Of course, the greatest, New York-est strength of the diner is giving us whatever we want, whenever we want it, and quickly. And while other NYC culinary icons like pizzerias, hot dog stands and Jewish delis get your order to you right away, few of them have it brought to you by waiters 24/7 while you're comfortably parked at a proper table.

So, take it on yourself to save NYC diners. They are reflections of the city itself and we can all pitch in to secure their survival. After all, the one big difference between diners and New York is that their costs shouldn't scare you away.

A List of Some of the Diners that haven't seen demise yet. Go patronize them now!