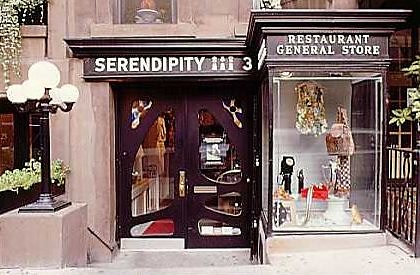 A very, very big day for the folks over at Serendipity 3.  We just spoke to their their head spokesman Joe Calderone who gave us the details of the 10am unveiling today of a new dessert  for the Guinness Book of World Records.  The dessert will take over the #1 spot as the official "Most Expensive Dessert in the World."  and gofg will be there to get it's first picture.

Details: The dessert is a blend of 28 cocoas (14 from the most exotic and rare places in the world) and five grams of edible 24-karate gold, served in a goblet lined with edible gold and eaten with a solid 18-karat gold spoon encrusted with diamonds.  There is also an 18-karat gold "crown" on the goblet that when removed turns into a bracelet that the buyer gets to keep, along with the spoon who's diamonds are black, brown, and white created by Euphoria in NYC.  The whole thing is topped with a whip cream covered in shaved truffles from France. The price tag?  A whopping $25k!!!!!!!!!!!!!!!!!!!!!!!!

At first we were a little apalled by this creation, now we are okay with it.  In fact, just knowing something this ridiculous exists in the world makes us smile a little bit.  Who the fuck would pay that much for a dessert is another question.  While we don't have a photo of this new dessert just yet, we will show you what held the title until now... 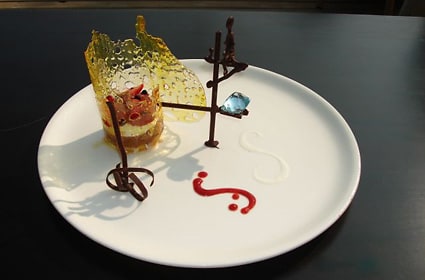 Availiable at Wine3 at The Fortress in Galle, Sri Lanka, this dessert debuted in March with a pricetag of $14,500.  There is an 80-carat aquamarine gem that rests on a sliver of chocolate, shaped to resemble the traditional stilt fisherman that's part of the resort's logo.  Diners can pocket the gem afterwards.  And, just for fun, here's what Serendipity sold as their most expensive dessert (until today)... 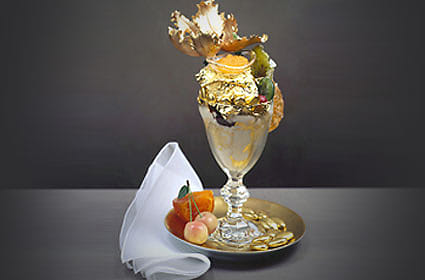 With a pricetag of $1,000, this dessert is the holder of the Guinness World Record for the most expensive sundae. Scoops of Tahitian vanilla bean ice cream infused with smoky Madagascar vanilla are coated in 23-carat edible gold leaf, which “leaves a ring of gold dust around people’s mouths,” said Serendipity spokesman Joe Calderone. Suffused with bittersweet chocolate and rare chocolate chunks, gold-plated dragets and truffles, the sundae is eaten with an 18k gold spoon and a mother-of-pearl spoon is reserved for the mini-bowl of sweetened, de-salted caviar on top. The utensils stay at the restaurant, but the Baccarat crystal goblet is yours for the taking. (Taken from Forbes Traveler)