Sam Sifton, newish restaurant critic for the Times, has dutifully filed his heavily anticipated reviews each Wednesday, covering Chinese banquet halls in Flushing, sausage joints on the Bowery and French bistros in midtown. But the last three reviews have all complained about corporate-feeling restaurants, making us think the Times should expand Sam's beat even more.

Below are excerpts from Sifton's most recent critiques.

" A Voce is a corporate enterprise, part of a master plan, and feels like it." 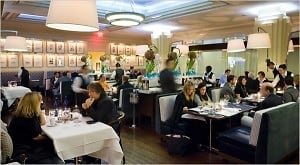 "There is everywhere space and chatter, even a glassed-in private room placed between the bar and the dining room, where deal merchants can eat in teams"

"But if the Oceana of old was a pleasant, shipshape room with elegant food and a caring touch, the new version is a high-functioning luxury mill, designed to service pre-theater crowds and to celebrate corporate success on expense-account dimes."

"Those Homers in the private dining room rip the things to pieces, then head out to the bar, tugging phones off their belts, calling for cars."

"The result is a Las Vegas event restaurant airlifted into Manhattan, a corporate cafeteria with a soundtrack of smooth jazz in the George Benson style. The food can be quite good. It can also be the opposite."

"In the meantime, the bulk of the business is out in the bar, which takes up much of the restaurant’s space. It’s loud out there, informal in the corporate sense of the word"

None of this is to say that Sifton didn't like the restaurants. A Voce Columbus and Oceana received two stars, and Aureol one. But the man does seem a bit chafed. A corporate trend in restaurants might seem a bit anachronistic in these recessionary times.

On the other hand, prestige restaurants with big name chefs catering to the few among us who haven't lost their shirts are among the safest bets you can make in a downturn. Perhaps this sort of catering to the well-heeled corporate elite is particularly grating on an (at least until recently) underpaid journalist slaving away in a troubled industry. Then again, perhaps all it means is that the Times should send Sifton to a restaurant outside of midtown.