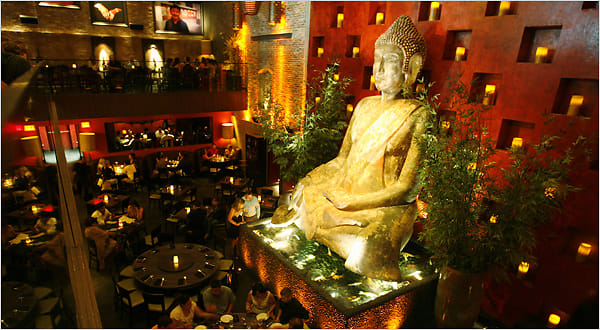 Many of you may remember reading the NYTimes piece a year or so ago that examined the massive revenue of Tao Las Vegas, which at the time was cranking out a whopping $55 million dollars.  Such "vibe dining" is of course fueled by the massive 10,000 square foot night club component run by none other than Noah Tepperberg's Strategic Group.  Noah and his pal Rich Thomas have perfected nightclub "stratification" (i.e. bottle service) both in Vegas and New York, taking clubs from semi-professional shady outfits into the legitimate investments we see today in the form of places like Marquee.

So with their newest iteration Lavo, it leaves us guessing for now at least, how much these guys are going to squeeze out of the new space and the pockets of eager club-goers? The nightclub footprint in Lavo is approximately 1/2 of Tao's at 4500 square feet, so an obvious guess would be that Lavo is going to do about 20 million+ in revenue but not much more.

In any event, it will no doubt be in Restaurants & Institutions Magazine's top 100 this year, and may very well be nipping at the heels of the No.2 restaurant, New York's Tavern On The Green, proving once again that Vegas is king for nightlife investments.