Our guests were in for quite the show at our redesign party last night at when Tinsley Mortimer and Devorah Rose went at it in front of cameras, and the entire party. But what were they fighting over? Thanks to our tipsters, we finally got the story.... 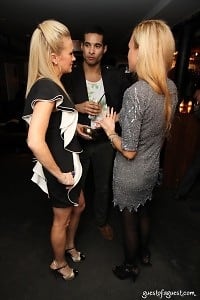 Apparently Devorah has been telling people that the prince Tinsley is dating (Prince Casimir of Sayn-Wittgenstein-Sayn) has no money and Tinsley pays for his apartment/meals/travel etc. This was obviously upsetting to the Tinz, who is also experiencing a very public and very hard divorce from Topper.

After our party, things seemed to be going okay for Devorah, until this morning.

According to sources, Devorah went to Teterboro airport to board a private plane for a photo shoot in the Virgin Islands but was stopped at customs because the name she was trying to use to board the aircraft wasn't her real name, which is Deborah Denise Trachtenberg. They wouldn't let anyone through because she wouldn't admit her real name in front of cameras.