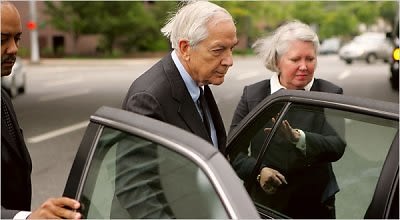 First it was the neglect and abuse petition filed in court by own son, and now Anthony D. Marshall, 83, son of the famed socialite has been indicted on charges that stem from how he and his lawyer managed his mother's estate (estimated at close to $200 million).

Looks like little Tony dipped his hand into the cookie jar a couple of times and forged signatures on documents that transfered millions of dollars and several assets over to himslef.  He also collected, get this, a $2 million dollar transaction fee for selling one of Mrs. Astor's paintings for $10 million dollars called "Flags, Fifth Avenue" by famous impressionist Childe Hassam (he even under reported the income from the sale on tax returns).

If he had just taken care of his mommy (while he took care of himself), like all good boys should, there prob wouldn't be much fuss about this at all.  No cookie for you Mr. Marshall! 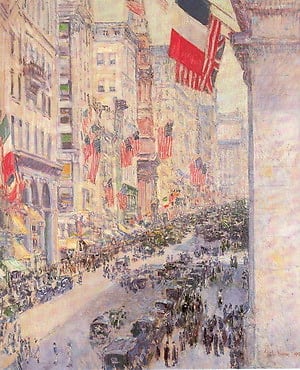 ["Flags, Fifth Avenue" also known as "Up the Avenue from Thirty-Fourth Street, May 1917,” by Childe Hassam]