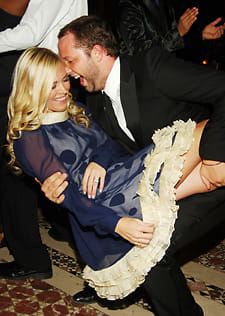 Yesterday, in the New York Times Magazine, Derek Blasberg (pictured above with Tinsley Mortimer) wrote a small article titled "Social Dynamite".  In it he points out the non-secret fact that the term "socialite" has lost it's exclusiveness.  Though that, as the article suggests, may not be such a bad thing.  Derek himself was last fall's Micah Jesse, a nobody from St. Louis trying to make a name for himself in NY society.  In comes Genevieve Jones, another "nobody-turned-somebody" from Baton Rouge.  Jones' had no pedigree (her father is a chemical engineer for Exxon Mobil), and no ivy league background (she didn't even attend college), yet she had already become Vogue's "It Girl" in March '06, and by last Septmber was on the front page of the Wall Street Journal in the article: "How 'It Girl' Scaled World of Fashion, One Party at a Time". That fall she befriended Blasberg, her fellow social climber, and made him her arm candy wherever she went (pictured below the two of them with Carlos Mota in Miami last year), and the rest is history. 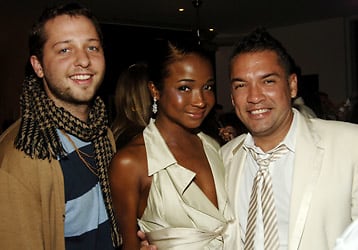 In yesterday's piece, Derek is quick to point out that although virtually anyone can put on a dress, attend some charities, and call themselves "social", the girls these days have a lot of  "other things going for them too: they’re doctors, art-world professionals, actresses, publicists, fledgling filmmakers and accessories designers. Are they social? Well, sure. Would they call themselves socialites? Not if they could help it. As one of these young women commented while having her portrait taken: 'It’s certainly not my favorite word. But you know what? I’ve been called worse.'"

That being said, here is our list of some things you should do if you so seek to be a NY Socialite:

HOW TO BECOME A NY SOCIALITE:

1.) Pretend you are someone important at all times (remember, you don't need to actually have money to pretend you do, just look at Olivia).

2.) Sleep with Patrick McMullan (if you're a guy-or at least become very good friends with him).

3.) Upon completion of #2, get photographed at important charity events, dinners, fashion shows, parties, and galas (remember it doesn't matter if you actually contribute or have any affiliation to them, just get in the pictures and leave).

4.) Be seen at the Inns (Beatrice and Waverly), Socialista, and Bungalow 8 (only if there are other quality people there that night), and make sure you get to know the doormen at each.

5.) Promote yourself.  This may be done a variety of ways, some have chosen to create handbags, but you can do anything it takes (myspace, facebook, asmallworld, and the blogging world are all at your disposal).

7.) Play up your unique traits. (Ms. Jones' isn't referred to as "the Black Paris Hilton" for nothing).

8.) Remain Mysterious.  (This may be the most important as the less you tell people about yourself the more interesting you will seem and the more they will want to have you around to find out about you)

After putting some effort into the above, you should have fashion designers, party promoters, and PR agents THROWING themselves at you.  Make sure to always remain a loyal promoter for their work but NEVER let yourself seem too interested.  Enjoy the ride.