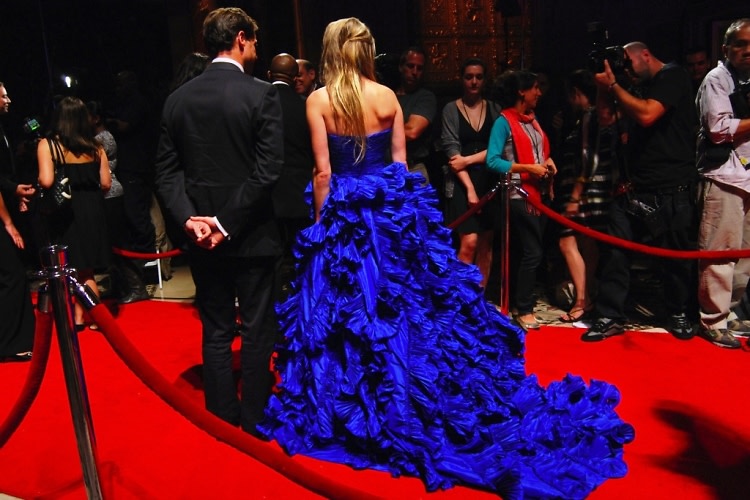 On posting the above photo from the New Yorkers for Children Gala of a woman entering the party at Cipriani's, we have gotten more than a couple of emails wondering "Who is the woman in the dress?"  Well the woman is none other than Julie Macklowe, Vogue's "it" girl this July.  But how did she get there?

Julie Lerner graduated from UVA in '99, virtually unnoticed by any of her peers and leaving barely a trace.  Her yearbook photo is a generic shot and she had no activities, organizations, or extracurriculars to speak of.  She received her finance degree from the Comm school.  But if you ask around those who went to UVA at the time, you won't have much luck finding anyone that has ever taken a class with her, shared a dorm, or even saw her at a party during her collegiate days.  And its important to note that UVA is in many ways a small and cliquey community.  After hiding out in Charlottesville, Julie Macklowe moved to the big city and has been busy!

First, she married one of the more influential real estate developers in the city, William (Billy) Macklowe who found himself taking over a very hard position at Macklowe properties, after the forced sale of the GM Building.  The GM building is the most expensive slab of real estate in the world, and was owned by his father Harry Macklowe's company "Macklowe Properties".  As current CEO of the company, Billy told Men's Vogue this August that he is working on bringing the world "Macklowe 2.0". Second, Julie is no dummy trophy wife.  She's has a enviable career as well as a portfolio manager for Sigma Capital Management.

With her a leading man, a beautiful baby daughter, high-profile job, and smoking body, Julie's life has all the fixings for the next "it" socialite.  Add in her coveted dress collection that has even the "notoriously high standard" Julia Allison drooling, and we have an amplified Tinsley Mortimer on our hands.