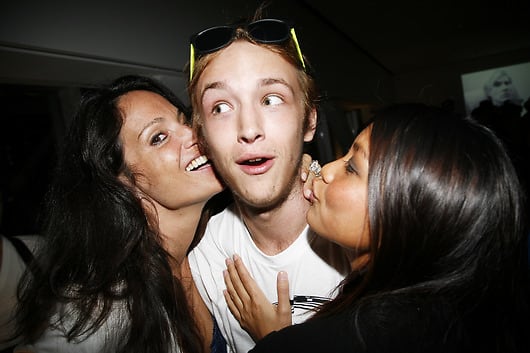 Liam McMullan is quite the ladies man, but that doesn't keep him from subscribing to the old "Bros before Hoes" mantra.  Last week, the Observer caught Liam at the Warhol party and some new interesting information has come to surface that may shed some more light on our Izzy Gold Saga:

Speaking of Mr. (Izzy) Gold, how is he doing with that empire of his?

"Yeah, which one. Do you mean Francesco or Chris Young? Because there are two Izzy Golds now, and there is a whole thing going on with that."

"I used to be friends with Francesco, but he did some shit that I can't forgive him for. He tried to go out with this girl," said Mr. McMullan, pointing at his wrist, which had a woman's name tattoed on it. "I told him it wasn't cool, but he did it anyway.

"I told her, 'I want you to break it off with him. If you want my friendship you won't do this,'" he continued. "I said, 'And don't just break it off, I want you to say some mean shit to him too.' And she did.

I have to say I'm not surprised that a girl is the cause of part of this rift.  Most things worth fighting for usually deal with a girl.  Brad Leinhardt represents both Liam McMullan and the "new" Izzy Gold, Chris Young.

[Will The Real Izzy Gold Please Stand Up?] [Getting To The Bottom Of The Izzy Gold Mystery] [Blue And Cream And Izzy Gold All Over] [Who Is Izzy Gold?] [Izzy Gold Make$ It Rain In Times Square]