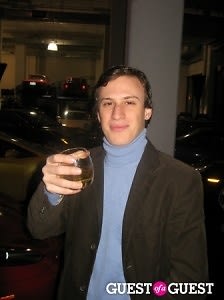 Oliver Estreich, 24, believes he has founded an important underground milieu; his group, the Native Society, aims to serve as a networking social club catering to people born in New York City from private school and upper-crust pedigrees. But his criteria gets a whole lot more nuanced.

We saw Estreich, the scion of a real estate mogul and designer, at the Classic Car Club party last night where he wore a powder-blue turtle neck under a blazer and had a toupee-seeming tuft of hair that would easily put him in contention for the next Bond villain role. His group is a sort of Saint A's, the Princeton/Columbia faux-literary society that aspires to bolster social cachet through exclusivity but only serves as a safety net for the awkward in need of constant validation.

"It's borderline that," he said.

While sipping some Glenlivet next to a Ferrari 550. Estreich explained how he formed  the Native Society as an online social network that has members meet for real-life parties, such as the organization's inaugural gala at The Plaza on November 5.

Estreich aspires to create a private members club with the strictures and barriers-to-entry found in the city's most prestigious apartment buildings.

"I started on the premisis [sic] of getting all the natives together who grew up in New York City and went to private school here," he said. "We expanded it on to those who have the characteristics to really grow the group."

This expansion for Estreich, who went to Browning and George Washington University, has loosened his already amorphous membership criteria to incorporate people he feels to be potential assets to the club atmosphere.

"We kind of  dropped the immediate criteria like that," he continued, "and now it's based more off of character, as if 740 Park Avenue; you go through a board. And I have a couple of members that, we go over new members and say, 'We like these people and want them to be part of our group.'"

Socialites like Peter Davis make up the group's 170-odd members. In October Estreich Tweeted, "172 members: 92 females-do the math to figure out the male#." His calculator wasn't nearby.

In  many ways, Estreich seemed fated to this venture. He grew up on 85th and Park, where he still lives at his parents' place with his brother ("I still reside there.").

"Well my parents travel, they go away, so it's my brother and I," he explained.*

He felt that this sort of career played to his strengths.

"I majored in marketing and psychology," he said, "I like events. So I figured: combine all of it into one."

The exclusivity , at least from Estreich's billing, seems set at a high bar.

"It's really hard to get in because you have  to be evaluated," he insisted before continuing his vagueness about the requirements. "You have to have the native sensibility. You have  to have an understanding of culture, cars, fashion, people. It's kind of like: it's a mentality."

"I wouldn't go so far as to say that you have to be rich to get in," he said, "cause we have  some people who aren't like that, but they offer certain aspects that help further the group as a whole."

Non-wealthy members, it seems, may just have to up the ante on other elements to gain this coveted acceptance.

But ultimately, it all comes down to Estreich.

"I decide," he said about admitted members. "It's a lot of power for one person. I have a good perception of people, how they can offer and add to the group. We have a good group of people and with groups comes power. We're power brokering relationships; that's what we're doing. "

Estreich's brother recently moved out; the founder of the Native Society now lives just with Copperfield, his dachshund.