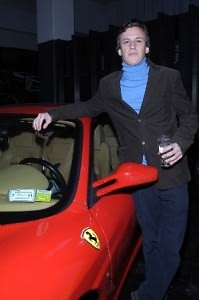 Last week, we brought you an exclusive interview with Oliver Estreich, the Native Society founder, turtle-neck wearer, veritable once and future king of the city's elite. But matters just got a bit more prestigious for Ollie...

Homeboy landed himself on the much-coveted Rosewood Hotels & Resorts 30 Under 30 and jotted me an electronic epistle to tell me the news.

"Thought you might enjoy this announcement," he wrote, linking to the story.

"As the President of The Native Society, Oliver R. Estreich created the first personalized social network of young New York professionals under the age of 30. Starting off as a private social network, the company has grown to encompass 220 members within its first two months of creation. Aside from his work with The Native Society, Estreich has also worked with The Central Park Conservatory in New York and various environmental preservation groups in Washington, D.C."

We believe that Estreich means The Central Park Conservancy, not "Conservatory"...that is, of course, unless he has been hiding his virtuosic musical talents.

Anyway, he tossed us this photo the Native Society's hired photographer took last week at the Classic Car Club's holiday party. Would you like to drive out to Amagansett with this debonair gentleman?