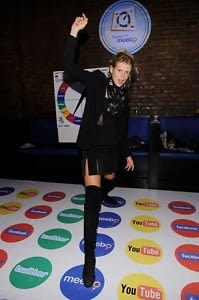 Alexandra Richards, the 24-year-old daughter of Patti Hansen and Keith Richards, has drawn quite a stir with her modeling, particularly in light of this year's nude spread in the French edition of Playboy.  But check out these racy pics from the fifth anniversary party for IM start-up Meebo.

Just kidding...there's perhaps a relativized risqué quality for the nerdy and Mountain View-inclined, but Richards kept everything on for what looks like an advanced game of Twister.

Then there was some crazy Price is Right-cum-Wheel of Fortune game of the 21st century. It caused some excitement evidently.

It's unclear why she was there or what vested interest she has in the tech sphere, but she seems to be hootin' and hollerin' throughout the antics. 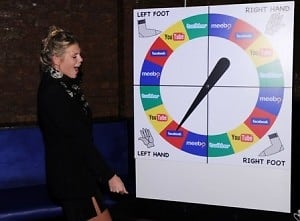