The mother and son that revived the word Oedipus on the modern tongue this past May with their shockingly intimate beach photos is at it again. Today Page 6 reports that Stephanie Seymour, American supermodel called the police on her son, Peter Brandt, II, self-proclaimed designer, art collector, socialite, and model. 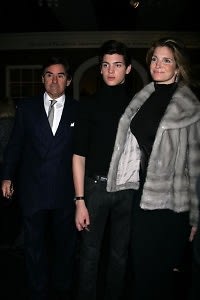 Seymour is no stranger to the police after having called them on prior occasions over disputes with her husband, Peter Brandt, Jr., the paper magnate. Seymour and Brandt, Jr. participated in ugly divorce proceedings, that highlighted her alcohol abuse and his control issues, for six months until they had a change of heart and reconciled this past September.

Greenwich, Connecticut police said, Seymour called them after having a dispute with 18-year-old Peter Jr., which Peter Sr. witnessed. Lt. Richard Cochran said that when police responded, they were told the mother and son had argued because "the son was going to visit with the mom, and the mom canceled," reports Page Six. Cochran said: "It was all civil in nature." Oh good we were worried it was something far more interesting than a civil matter.

I am not one to make light of domestic disturbances but calling the police on your son in an argument feels a little too spousal for a situation that is supposed to have occurred between a mother and son. Stay tuned for anything we can dig up on this increasingly odd couple.