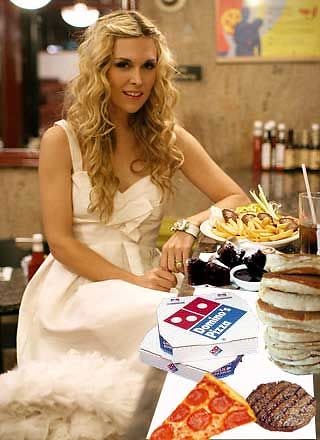 This may be the best "New York Diet" column yet. We just love NY Mag's series where they ask relevant New Yorker's to reveal what they eat over the span of one week. This week, worldly socialite Tinsley Mortimer gave it a go and explained her no-carb diet that consisted of domino's pizza, donuts, and pancakes. You guys seriously have to go read this shit. We are having a tough time deciding if the article is supposed to be a clever PR trick (trying to make the Tins seem like a normal American glutton), or a cry for help. Reading over the pizza binges followed by days of nothing but coffee this isn't a "diet" it's a disorder. We also learn that she attended the Cavalli Halloween party at Cipriani's on Wednesday night and likes donuts and cupcakes.

Ah alas, Tinsley goes on to justify eating oreo pizzas and stacks of pancakes because, even though that may be bad, she also always remembers to remove the bun and ketchup with her hamburgers per her "low-carb" diet. Jezebel readers had a fun time disecting this interview as well here. They went as far as adding up her total calories throughout the binge/fast week...The verdict: 10,250....You do the math.