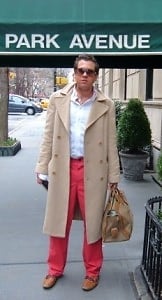 Any takers?  No, this isn't some new Reality TV show, or VH1 special.  It is Reality.  One of New York's most social socialites, Kristian Laliberte needs a roommate, and he needs one now. And it won't be on Park Avenue (as the awning on the picture might suggest).

[Kristian] is looking for a roommate. I have one bedroom to rent in beautiful doorman building in midtown west

So the prerequisites are...

1) dealing with Kristian, and 2) dealing with being in Hell's Kitchen, or as they're now calling it, Clinton.  Issue 1 of course will be an issue of personal preference.   We're not sure if the "doorman" aspect of the building will make up for the fact that the building is in Clinton, but maybe the increase of your social exposure will help, if you make friends with the guy, you will be taken around to all the parties and undoubtedly be pictured with him and his posse.  Again, it will be personal preference.

But there is one thing for certain.  You will pretty much have a two bedroom apartment from 6pm onward each night, seven days a week.  Think of it as the reverse Banker roommate.  Instead of being gone all day, your roomate will be gone all night.  Wait a second...A Banker roomate might be around all the time now that they are most likely out of a job, so throw that analogy out the window.  Anyway, you get the point.