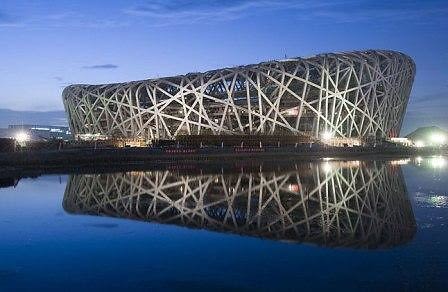 This is Beijing's new Olympic stadium.  And the artist Ai Weiwei wants nothing to do with it.  Specifically, he attacked the "disgusting" political conditions in the one party state of his and told the Guardian he will not be attending the opening ceremony next summer or be associated with either the government or the games.

Ai has a family history of persecution by the communist government, spending much of his childhood in the remote Xinjiang after his father, Ai Qin (one of China's greatest modern poets), was exiled.  His involvement with the Olympic project therefore, raised eyebrows from the start.  The opening ceremony will be on August 8th next year and Ai has accused those choreographing it (including Steven Spielberg) of failing to live up to their responsibility as artists.

"I don't like anyone who shamelessly abuses their profession, who makes no moral judgment.  It is mindless." Spielberg might drop out as well if China doesn't drop its opposition at the UN to an increased peacekeeping force for Darfur or their support for Sudan's regime.  Spielberg has said his overriding goal in accepting the position of "consultant" on the opening and closing ceremonies was "to give the world a taste of peace, friendship and understanding."  Sudan and Darfur issues aside, we are anxious to see what he comes up with.