Competitive eating is a sport that takes dedication, endurance and practice. There are a ton of rising stars that put Joey Chestnut to shame and who hold even more gross and amazing records than hot dog champ and renegade Kobiyashi. Check your gag reflex as you check out  the biggest names in competitive eating below.

Professional organization Major League Eating oversaw all of the below contests. 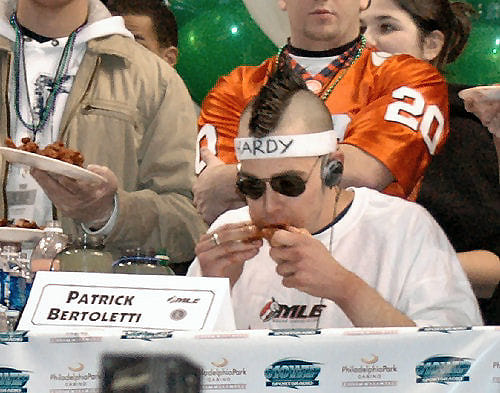 Twenty-five year old  Bertoletti hails from Chicago and is the biggest record holder in the field of competitive eating. In 2008, he ate 47 Slices Big Apple Pizza/Battle at the Big Apple World Pizza Eating Championship. 47 slices!

He also holds the record for eating 4.26 pounds of Baby Back Ribs in 8 minutes, and downing 9.17 lbs blueberry pie in 8 minutes.  In a mere 9 seconds he was able to drink 22 oz of 7-Eleven Sports Slurpee, has chowed 7.5 pounds of Fried Catfish in 10 minutes and eaten1lb, 15.5 oz of Chocolate Hearts in 7 minutes. In addition to consuming:

47 Glazed and Cream-filled Doughnuts in 5 minutes 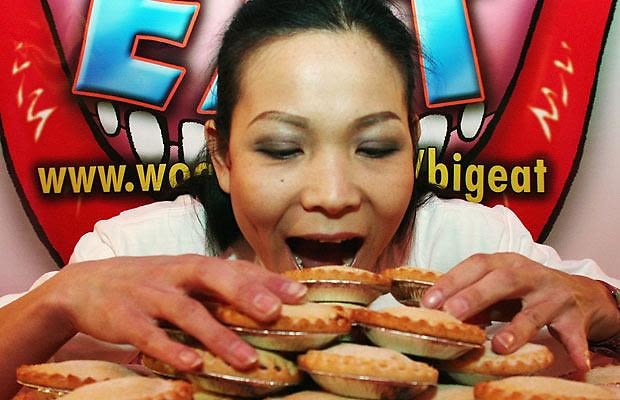 Don't let this innocent face fool you, the lady is a wrecking ball. At this weekend Nathan's International Hot Dog Eating Contest she ate 40 hot dogs and buns in 10 minutes and won the first-ever pink Pepto Bismol Belt in the women's division. According to the MLE web site:

"There is an century-old prophesy within the competitive eating community, dismissed by most, that foretells the rise of the One Eater, a woman who will electrify America's gurgitators and lead them to international victory once again. Like Joan of Arc before her, this eater will be slender of stature, but mighty in strength."

That woman is Sonya Thomas, who took 2003 Rookie of the Year, was nearly unbeaten in competition in 2004, and has been shoving food down her throat at rates unknown to mortals ever since. Some of her more amazing feats include eating 8.31 pounds Armour Vienna Sausage in 10 minutes,  26 dozen (DOZEN!) clams in 6 minutes, 80 Chicken Nuggets in five minutes, and a whopping 44 Maine Lobsters (11.3 Pounds of meat) from the shell in 12 minutes. We're assuming winning meant she didn't have to pay for all that seafood. 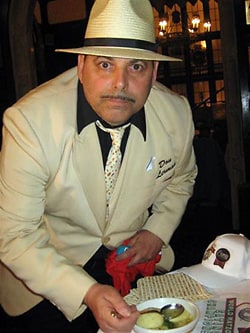 According to his "Bib Sheet," Don "Moses" Lerman, 56, "is known as having the fastest hands in competitive eating."  He is the record holder when it comes to baked beans, eating 6 pounds of them in only 48 seconds. That's shorter than it takes the average person to take a sip of water. He is also the record holding butter eater, with 7 quarter-pound sticks, salted butter in 5 minutes, and has the title for burgers, downing 11 1/4 Burgers in 10 minutes. Do not bring him to your friends BBQ. Gangster! 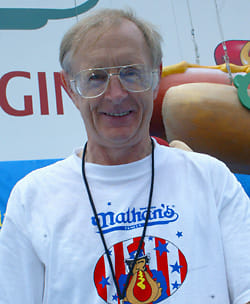 At 65 years old and just 132 pounds, Richard LeFevre may not look like much of a contender, but this guy is one big eating machine and excels in long game (30-45 minute) competitions. Despite this, he's managed to gain himself records in short eating competitions holding the title for birthday cake eating, with 5 pounds in just 11 Minutes. He has also eaten 6 pounds of SPAM from the can in 12 minutes and 30 Tex Mex Rolls in 12 minutes, thus earning him respect by just about everyone. 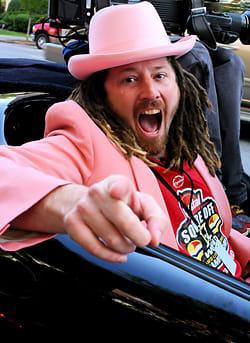 And just in case nothing above sufficiently intimidated you/grossed you out/blew your freaking mind, meet Crazy Legs Conti, the pink hat wearer who holds the record for eating the most...pancakes and bacon!   He managed to down 3 1/2 pounds in just 12 minutes making himself Denny's All You Can Eats worst nightmare. Prior to competitive eating, he worked in New York as a window washer, nude model and sperm donor.  There is a documentary about his life titled Zen and the Art of Competitive Eating.