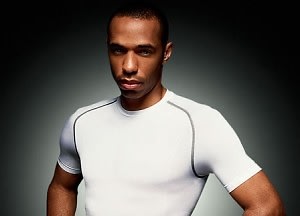 Not into soccer? You will be after you meet the adorable Thierry Henry. He's French. And he has a thick accent. And he can kick a ball really hard. And he loooovves New York.

As the WSJ - seemingly won over by the aforementioned adorability of Mr. Henry - reports, Thierry recently signed with Major League Soccer team the New York Red Bulls, and will play in his first American exhibition match today. He's a good player, a devotee of Madison Square Garden, and he's got a faint whiff of scandal surrounding him. He's perfect for this town! 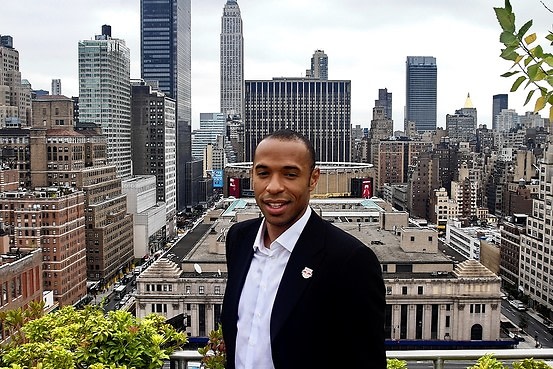 For Thierry, as for many who come to our fair city to live and work, arriving in New York seems to be the culmination of long fascination for the city. He first visited at 19, and was awestruck by what he encountered: "I saw everything with big eyes. I thought I was hallucinating. Seeing all those skyscrapers, those parks and every so often, something like a church stuck in between two buildings." Oh, Thierry, you're so cute. Come over and we'll feed you croissants and tell you about downtown city planning. 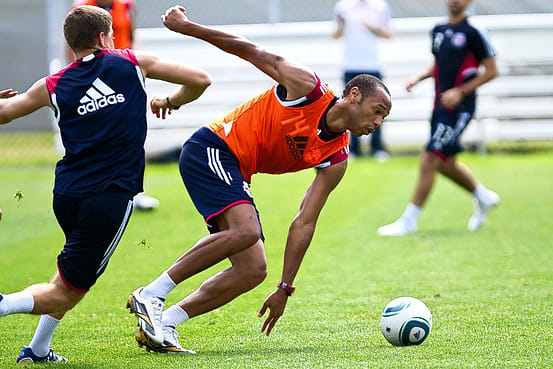 [Photo courtesy of the WSJ]

In between vacations to La Grande Pomme, he studied footage of the Giants' Lawrence Taylor and rolled to tapes of Run-DMC. His  tastes did not go unnoticed; "I've always felt that he was a little bit American," manager Arsene Wenger told the WSJ.

Not that it's been all Pain Chocolat and Apple Pie along the way. The past few years have been pretty rough on Thierry, and New York may be as much of an escape as a new adventure. Last season in Barcelona, he was dogged by injuries and lost his starting line-up position. Then, in a World Cup play-off against Ireland, Thierry infamously set up a winning goal for his team by knocking the ball with his hand. (Note to non-soccer fans. That's really not allowed. Like really.) The refs didn't catch the offense, but angry fans did, and Thierry's post-game confession of the fault did nothing to assuage their ire.

The handball heard 'round the world.

This year's World Cup was even worse than the Handball (Balle de Main?) Scandale. Thierry has107 assists and 249 goals under his belt (Note to non-soccer fans: that's kind of a lot), but he "barely appeared" during the games this year. After the French players' humiliating elimination in the games and mutiny against their trainers, Thierry met with the ever-excitable President Sarkozy to talk about why the team sucked so bad. Because President Sarkozy has made soccer a matter of state, and now interferes in everything, that's why. The media was not amused.

Some in Europe are speculating that Thierry's move to America is a sign that he's losing steam. He will, after all, be 37 when his contract with the Bulls ends. (Note to non-soccer fans: that's sort of old.) We, however, prefer to think that he's come here to be healed by the generous love of the American people, and the even more generous (and dirtier) love of a New York girl. Ie you. Start brushing up on your French and sports talk.

See? He kicks really well. He probably does . . . other things well also.