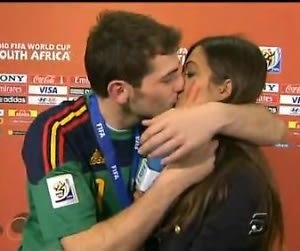 We love love loved every second of World Cup 2010. Of course, we have our favorite moments from on the field (Donovan's Goal, the Ghana Uruguay PKs), but here are some of the sweetest moments from off the pitch. (Warning: If you tear up easily, maybe don't watch at work?)

1. Bill Clinton At The Games

Bill Clinton sharing a beer with Carlos Bocanegra after a game; Bill Clinton chilling with Mick Jagger in the stands like it's no big thang, Bill Clinton standing up and cheering for the USA like a proud Dad. Every time we saw the goofy former President this WC, we couldn't help but think "Awww....Bill Clinton!" 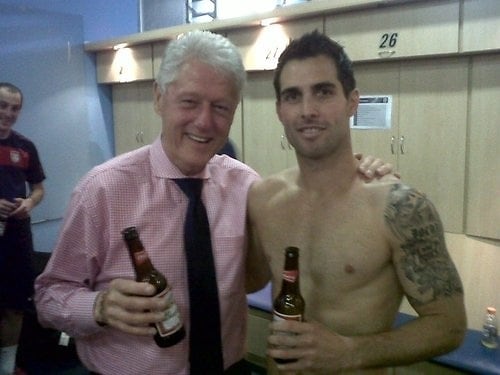 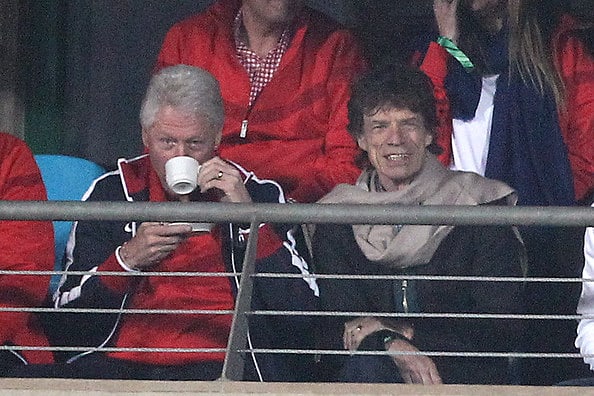 Spain's Iker Casillas' reporter girlfriend tried to interview him after the World Cup, but the goalkeeper was a bit befuddled and emotional, so he swooped in for a romantic kiss instead. Sigh.

Uruguay had a lot to celebrate this World Cup: they made it to the semi-finals for the first time ever, and striker Diego Forlan won the tournament's Golden Ball award just this morning. Not bad for a country with a population of 3 million!

Below is a video that Forlan himself uploaded onto his YouTube account and then tweeted: it's an intimate look at the Uruguayan team celebrating their success over Ghana at the hotel in South Africa.

4.  The Queen Visits The Locker Room

After the Spanish Victory, Queen Sofia of Spain made an unexpected visit to the locker room. As a Gawker commentator points out, the boys look both pleased and slightly embarrassed by the Queen's visit, kicking away bottles and clothes that are sprawled across the floor. Carles Puyol is caught the most off-guard--he enters the room midway, with only a towel wrapped around his waist.

Good lord, did that Octopus ever have a good run! He persevered against death threats and high pressure to come out with a perfect record. That'll do, octopus...that'll do.

7. America Got In The Game

America got in the game this year, in more ways than one. Sure, our team advanced to the knockout round for the first time ever. But more importantly, Americans took notice of the World Cup like never before. Take a look at this, frankly amazing,  video from Huff Po.