Go HERE for more photos from this event by SCOTT BUCCHEIT and TAG YOURSELF and YOUR FRIENDS!

Although tennis players have been seen around town all last week, (Maria Sharapova at Instyle, Anna Kornikova at K-Swiss) Friday was the official start of the US Open festivities. I attended the official US Open Player party held at Skyline Studios, with my good friends Susie Castillo and Matt Leslie. After walking the green carpet we headed upstairs for the party produced by the EMM Group. Others seen at the event included: Emmy Rossum, Olivia Palermo, Julie Henderson, Rachel Heller, Naeem Delbridge, Jed Weinstein, Tim Morehouse, Eugene Remm, Mark Birnbaum, Danny Volk, Ryan Brown and many more.

The following day we headed to Flushing Meadows to the USTA National Tennis Center. We went to watch Susie while she hosted the Arthur Ashe Kids Day presentation that was being filmed for CBS. Susie's co-host was another former MTV VJ, and 8 time Kids Day host Quddus Phillips. We hung with Susie and Quddus in the green room and were able to see and meet the stars of the day up close as well as watch producer, Michael Fiur, in action. 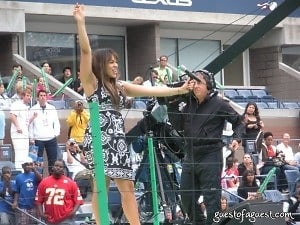 The show itself is quite a production. Featured musical performers included: Matteo, Justin Bieber, Honor society and Jordin Sparks. Will Ferrell and Will Forte were both on hand for comic relief. The players were also well represented with Andy Roddick, Roger Federer, Serena Williams, Maria Sharapova and James Blake all taking part in exhibition matches and challenges. One of the funniest moments was Will Ferrell coming out to judge a match dressed as James Blake including bald cap. The kids had a great time and a lot of money was raised for charity, which is a wonderful way to remember a great man, Arthur Ashe.

[Will Ferrell Takes His Place Among Tennis Greats]

US Open• Will Ferrell• Skyline Studios• US Open Player Party