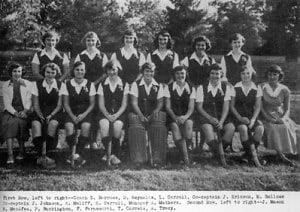 Sports play a big role in the New York social landscape. If you're going to sip Veuve at a Polo Match or watch the US Open, it helps to know the rules of the game. So, for your edification, (and ours!) we bring you our Quintessential Guide to Preppy Sports. Today's edition: Field Hockey!

Although NY scenesters aren't exactly all clamoring to join an adults-only field hockey league, many a prepster's youth has been colored by this incredibly competitive and cutthroat sport.  Running around in plaid skirts, armed with hockey sticks, is basically a  rite of passage for all remotely preppy suburban girls. Many an uptown conversation is littered with a reference to that time on the varsity team at Exeter or Andover.  Field hockey is a main staple of all things preppy, and knowing your ins and outs is pretty much indispensable. To refresh your memories (or school you altogether) and accelerate the girly bonding, we present you with a crash course in all things field hockey... 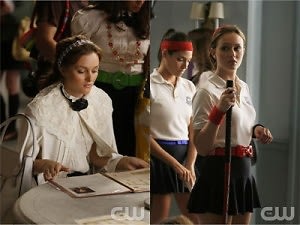 First played in the 19th century, field hockey has a long and storied international history. It's played by men and women all over the world, and there are a few notable international tournaments, such as the Hockey World Cups, Champions Trophies, and that super small, less important tournament also known as the Olympics. Across the pond, field hockey is very much a co-ed sport, attracting hordes of athletic and attractive youth. However, here in the US of A, field hockey is a sport dominated by surprisingly ferocious, cable-knit clad blondes. It's usually accompanied by lacrosse, yet another sport championed by East coast prepsters. 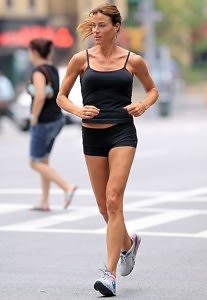 Think precipitously short plaid skirts, french braids, knee-highs, and oh-so-sexy mouthguards. As of late, safety concerns have been revolutionizing field hockey, introducing eye guards (or... goggles) and for the more delicate, even helmets... unfortunate for the more sartorial-savvy. There's not a whole lot of lee-way with team uniforms, and not too many opportunities to flaunt one's personal style, so learning to love neon sports bras and all things UnderArmour is a must. Embrace the spandex (Think Real Housewives' Kelly Bensimon). Go crazy with the sexy racerbacks, rainbow colored headbands, and knee socks. If that's not quite enough to sate your stylish appetite, learn to take pride in looking like a sexy-sporty school girl... Or better yet, go buy a tie-dye mouthguard, they're all the rage right now!

Protecting one's delicate and girlish frame is a first priority, so investing in quality shinguards and cleats is absolutely necessary. STX and Cranbarry make top of the line shinguards that come in a plethora of fun technicolor shades! Hooray! In terms of footwear, cleats or turf shoes are where it's at. Asics, New Balance, Adidas, are just a few brands which make some choice options. When it comes to the all important field hockey stick, name your price. Gray's, Cranbarry, STX make sticks with prices from a laughable $25 to a wallet-thinning two crisp benjamin's. 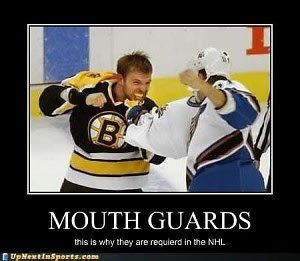 First things first, field hockey is a team sport, with 11 players on each team, including a goalie. Games are played on a pitch, which is either grass or astroturf. The pitch is bound by white lines, the outermost which compose of the boundaries, outside of which is 'out'. The semi-circular area surrounding the goal is known as the shooting/scoring circle.

Sticks are curved, and only the flat, inner side of the stick (the face side) is allowed to touch the ball while it's in play.  This is the natural side for righties, but lefties are shortchanged, as left-handed sticks are not permitted. Dribbling by rotating the stick from left to right is called indian dribbling (so politically correct).  Dribbling also involves hitting the ball in a forehand motion. Penalties can be awarded for lifting a stick or ball too high, where it might be in danger of endangering an opponent and hitting them in the face. 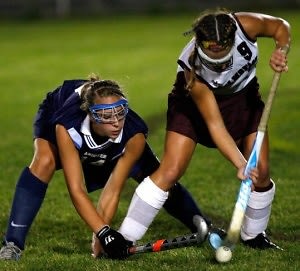 There are no official fixed positions, but team formation generally resembles soccer strategy. There are defenders, midfielders, offenders (also known as forwards), and the goalie. The game is presided over by two umpires, who each control one side of the field. The match consists of two thirty-five minute halves, divided by a five minute half-time.

LIke soccer, tackling is pretty much the name of the game, so things can get fairly dirty. As long as the tackle doesn't involve contact with the opponent or their stick before gaining possession of the ball, you're in the clear. Deliberate use of the body to push an opponent is illegal (obstruction), but given the pace and tone of the game, much goes "unseen" by jaded referees.

When the ball crosses the sideline and is out, the opposing team takes a sideline hit from the area where the ball first went out of bounds, and the game resumes.

When a player commits an offense outside of the scoring circle, such as an unfair tackle or obstruction, a free hit is awarded. If it occurs inside of the shotting circle, this is a penalty corner. The attackers from the opposing team are lined up along the semicircle, and another member hits from the corner sideline. Five defenders are positioned behind the backline bordering the goal, and run out to defend once the ball is in play. All other defenders must at the center line, in between the two halves of the pitch.

When defenders commit deliberate fouls in the circle, a penalty stroke can be given to the opposing team, in which a single attacker has a chance on goal.

As always, a diagram for your viewing pleasure: 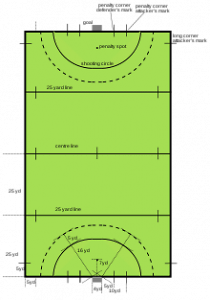 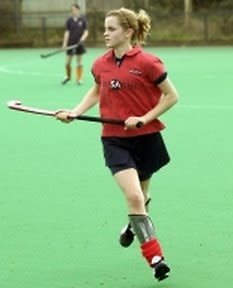 Emma Watson kicking some ass on the pitch. 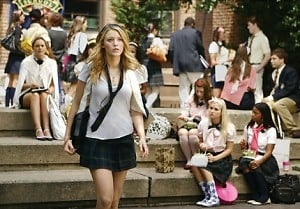 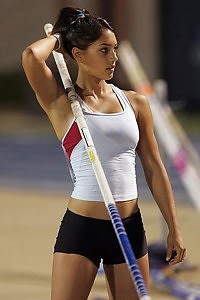 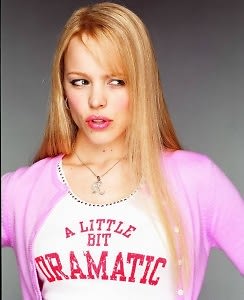 Let's make one thing clear... Field hockey may be a sport full of preppies, but it is incredibly aggressive (not so surprising?). Girls play dirty, and there's a lot of pent-up rage behind those Ralph Lauren model faces. Blair Waldorf  and Hermione play field hockey... need we say more?