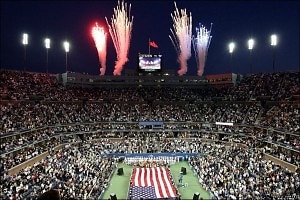 The 2010 U.S. Open kicks off Monday at the USTA Billie Jean King National Tennis Center in Flushing Meadows. Check out our handy guide to the event if you're one of the nearly 800,000 people who'll attend.

Getting There: Don't waste time considering any option other than the 7 train. Unless you're a seeded player or Important Famous Person with a driver, there's no convenient drop-off area near the courts. Parking in the Citi Field lot is a bit of a pain for reasons other than proximity to the Mets clubhouse.

Getting In: Lines for the day sessions aren't too bad. But evening sessions result in an epic bottleneck at least an hour before the 7pm start time. Don't bother getting there before or at the stroke of 7pm. Night matches rarely get underway before 7:30 at the earliest. Leave the bags at home to expedite the process.

Day vs. Night Tickets: It's hard to go wrong when picking a U.S. Open session to attend, as different options offer unique experiences.

Daytime grounds passes used to be a really good deal, giving you access to all the outer courts from 11am to 7pm for around $20. They'll set you back $50 this year, but it's as good a bargain as you're gonna get. Ambitious tennis lovers in comfortable footwear can gorge on a feast of matches, especially during the tournament's hectic first week. 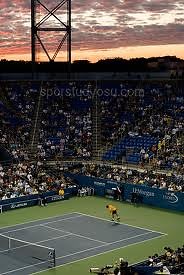 And there are few better ways to spend a late summer afternoon than watching a match at the relatively intimate Louis Armstrong, right, or Grandstand stadiums, both of which sit in the shadow of Arthur Ashe, the venue that replaced Armstrong as the Open's main stage. You're really getting two prime courts for the price of one here, as Armstrong and Grandstand are connected, with a perpetual cross current of fans gliding between both. Also, these courts get overflow and day matches that are inevitably pushed back into night, making it possible to catch 12 straight hours of tennis without the hassle of standing up.

The 23,000-seat Arthur Ashe Stadium opened in 1997, and has never been a particularly beloved venue despite the electrifying tennis moments that have taken place there. It's too big, too generic and too corporate, with luxury boxes and advertisements taking up an excessive amount of prime real estate. But this is where the big names give their best stuff under the stadium's blinding klieg lights. It's where championships are won and lost. And you'd have to try really hard to not spot a celebrity in the stands or on the hot dog line.

What to Look For: The big story leading into this year's Open is who won't be there. Serena Williams is sitting this one out after slicing her foot open on a shard of broken glass in a Munich restaurant. So she won't be able to redeem herself after a very memorable tantrum last year during a semifinal with eventual winner Kim Clijsters, who'll defend her championship title. Serena's sister Venus enters as the third seed. Also felled by  injury and missing in action is 2009 men's winner Juan Martin del Potro. An aging and possibly fading Roger Federer looks to remind everyone he's the Best Tennis Player Ever as he does battle with Rafael Nadal (who has won every other Slam but never made it to a final here), the surging Andys Roddick and Murray, Serbian live wire Novak Djokovich and a slimmed down Mardy Fish.

Star Gazing: If there were a bracket for celebrity visitors to the U.S. Open, it would probably whittle down to a yearly quarterfinal between Christie Brinkley, Donald Trump, Gwen Stefani and improbable Roger Federer bosom buddy Anna Wintour. Ann Coulter and Star Jones are frequent courtside spectators. But don't scalp your tickets just yet. Will Ferrell, Jim Carrey, Colin Farrell, Matthew Perry, Martha Stewart, Natalie Portman, Naomi Campbell and Charlize Theron are among the many boldface repeat guests.

Keep an eye on the outer courts once everyone's attention has shifted to Ashe. Big names often warm up or just fool around--think Andy Roddick acting as line official for a recreational match featuring his younger brother--in the half-light.

The Tennis Center does not break the mold of sporting venues serving obscenely overpriced and utterly forgettable food. However, that might change this year.

The U.S. Open is replete with WASPs or people trying to be WASPs. So don't feel guilty ordering a gin & tonic instead of a Bud, as you might at a Yankees game.

You can smoke all over the grounds, including in the open air Ashe corridors between levels and sections.

If you're stuck in the Ashe nosebleeds, be patient. Staffers distribute fliers that get you to prime seats as the stadium empties out later in the night.

[via US Open, Gawker, Gunny]