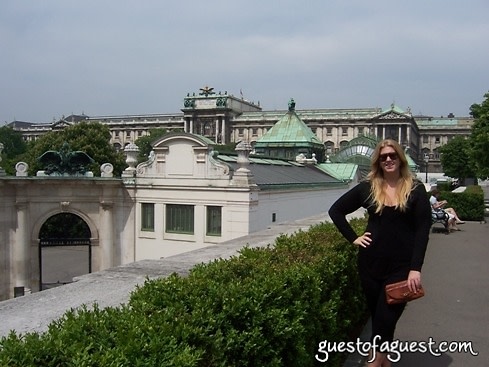 [Kelly Will takes on VIenna]

My adventures have taken me to Vienna this week, seeking architecture, palaces, weiner schnitzel and the Life Ball.

Vienna is a beautiful city with many historical buildings and palaces. It feels a bit reminiscent of Parisian architecture - many of the buildings are 7 floors high or less and date back hundreds of years. You can speak almost any language and be understood - German, French, English, Italian and even Spanish were widely understood everywhere I walked. The weather during this time of year is just beginning to heat up for summer and was in the mid-70's each day. Also important to note, Vienna is a smaller city and easy to maneuver via walking, taxis or their speedy outdoor tram service.

So I landed after the 8 hour flight, took a shuttle to my hotel, Le Meridien, and grabbed a local map. The first thing I always do is find a map that can easily be folded into my pocket! (I'm not big on looking like a tourist.)

Window shopping was in order first, so I headed to Mariahilferstraße, which is Vienna's longest shopping street. Among outdoor cafes, lingerie shops, formal menswear boutiques and glittering accessory stores, they have the most gorgeous H&M that I have ever seen - gold gilded doors and windows, but fyi, the merchandise remains the same... As I walked along the main street, I bumped into Alan Cumming as I purchased an Austrian classic, topfenstrudel (pastry with cream cheese), for breakfast at Aida. Aida is their very pink answer to our Starbucks obsession and offers delicious coffee and pastries all day. It genuinely looks just as cartoonish as their website. It's fantastic.

I left the main shopping area and began to meander through the streets passing the State Opera House and getting lost in the winding inner city streets. I came upon a dreamy little shop named Pinocchio, which has, not surprisingly, all wood creations for children. The streets are cobbled and many shops are tucked away in courtyards and have no websites, so don't be afraid to explore. I found a French gift shop that was so cozy that I could have moved right into it. I wanted to see the State Park next, but was easily distracted by the British Bookshop.

Eventually, I made it to the Schonbrunn Palace, aka, the Imperial Palace and summer home of the Habsburg dynasty - the once ruling family. There are dozens of rooms that are open to the public, including the ones lived in by royal Empress Maria Theresa from 1745 - 1780. I highly recommend taking a tour of the palace and the royal gardens.

By my second day, I went on a search for schnitzel. Dining is a particularly important adventure in any new country and I knew I was going to be diving into the world of weiner schnitzel (lightly breaded veal). I ended up in a church courtyard called Franziskaner Platz at Immervoll restaurant on Weihburggasse street. I had white asparagus cream soup with perfectly authentic weiner schnitzel and warm German potato salad. It was a perfect meal. Sausages, pastries and even Italian food are easy to find in this city, so it's possible to please any picky tourist.

My final night was Saturday and time for the Austrian Airlines sponsored Life Ball 2008 in Vienna's City Hall and outdoor park. Sharon Stone and Kim Cattrall were there to welcome the 40,000-plus costumed revelers to the party. This yearly event is Europe's biggest fundraiser and supports HIV/Aids research and charities. You could consider it New York's Gay Pride, Fashion Week and Halloween all combined and hopped up on about a million gallons of Austrian developed Red Bull.

Debbie Harry and Jody Watley each performed, while Lydia Hearst and Markus Schenkenberg walked in the dramatic and very naked Agent Provacateur fashion show. The Life Ball stage and runway is unlike any you will ever see during fashion week - it's enormous - easily 100 times the size of a typical fashion runway! The entire event was spectacular and one of a kind. I even had a moment to say hi to Kim Cattrall, who was sipping an orange juice and speaking to her Austrian friends in perfect German backstage during the fashion show. (She explained that she learned the language when she lived overseas as a young girl.)