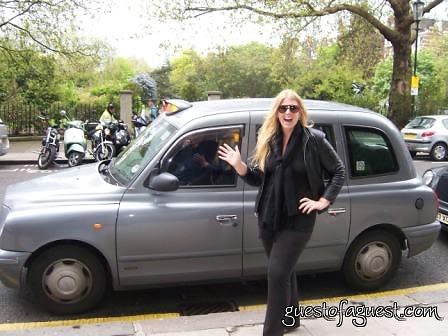 Note from GofG: Our favorite guest blogger, Kelly Will, (Freelance writer for the NY Daily News and NY Times), is at it again. She"s traded the dulce de leche for dinners with wine masters and iced pastries in Soho...the other Soho that is, across the waters:

In a city where kings and queens make way for their gorgeous young princes, is it possible to dance in their palaces, find the perfect vintage jacket and talk corks with a handsome master of wine?

I"m back to spin my tales, but more importantly, instead of looking for a new pad in NYC, I"ve decided to play the best game of avoidance and hop on Silverjet. Direct from Newark to London and all business class, Silverjet is truly the friendliest skies I"ve ever flown. The chic chef from Le Caprice in London created a mouthwatering fig and proscuitto salad followed by a fillet of haddock with braised borlatti beans and chorizo as my glamorous in flight meal. Hello lover.

Let"s leave the food behind and delve into London-town. I hopped the train from Luton airport (that"s the best treat of Silverjet- you avoid Heathrow!) to the fab shopping, all glass mecca that is the St. Pancras station in the heart of London. I nipped a cabbie to my hotel in Knightsbridge, the Jumeirah, you know, the Essex House parent, and slipped into a quick jetlag coma in my suite.

On day two, I dined with Liam Steevenson, the second youngest Master of Wine in the world and we discussed the last remnants of wine corks...in the United States. Apparently, moreso than the French and the Brits, everyone but us is comfortable drinking their exquisite wines sans corks, with screw tops. I don"t consider myself an elitist, but I do enjoy the elegant process of uncorking a new bottle of wine...

In my brief trips to London I"ve never had a chance to strut my always black-clad stuff through any of the palaces, so I toured Hyde Park before passing through the aged walls of Kensington Palace. By day three I was ready to take on the big guy, Buckingham Palace, where I witnessed the changing of the guard and a crowd almost larger than any I"ve seen in Times Square. I also picked up my souvenir postcard of Prince Charles with Queen Elizabeth. I just couldn"t resist - it"s awkward and intriguing, just like Buster and Lucille. (Arrested Development reference.)

As I slipped through the streets past Big Ben, Westminster Abbey and Trafalgar Square, the typical weather turned on me and dark clouds turned to giant drops of rain. I was forced to dash into a vintage shop in Soho where I found the perfect pale yellow Member"s Only jacket - it looked surprisingly better on me than it did on my Dad in the "80"s - and he"s a handsome Robert Redford type. I slowly wandered back towards my hotel, past Christian Louboutin (sigh of wishfullness) and into Patisserie Valerie for a perfectly iced pastry, but more for the beautiful peach bag it came in.

As the Jumeirah Hotel, the palaces and blooming parks turned into the countryside, my all too short time in London ended, but not before I bumped into Plum Sykes in the Silverjet lounge, waiting to board her flight back to New York. And with that, I knew it was time to return home.