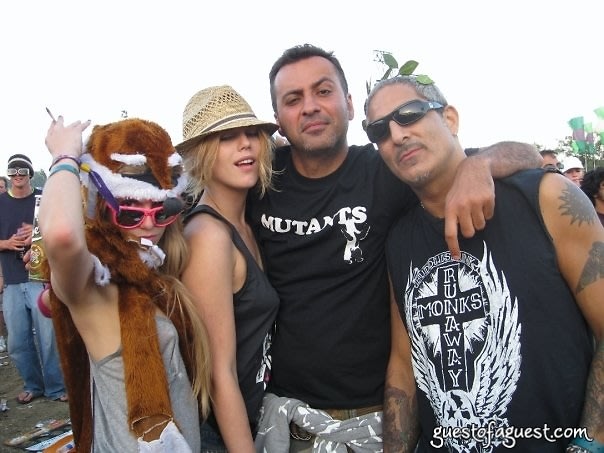 [Theodore and Alexandra Richards with Nur Khan at the Glastonbury Festival]

You know how when you meet someone and you instantaneously know that they have never had to work at being "cool"? This is how I perceive the Richards sisters. No surprise that they are hitting up hip performing arts festivals with Rose bar's Nur Khan.

What is the Glastonbury Festival? It's the largest greenfield music and performing arts festival in the world and a template for all the festivals that have come after it...

"It's like going to another country, a hip and thrilling Brigadoon that appears every year or so. Coming to Glastonbury involves a fair amount of travel, and probably a queue to get in but, when you get past these impediments, you enter a huge tented city, a mini-state under canvas. British law still applies, but the rules of society are a bit different, a little bit freer. Everyone is here to have a wild time in their own way."

The Festival takes place in a beautiful location - 900 acres in the Vale of Avalon, an area steeped in symbolism, mythology and religious traditions dating back many hundreds of years. It's where King Arthur may be buried, where Joseph of Arimathea is said to have walked, where leylines converge. And the site is ENORMOUS - more than a mile and a half across, with a perimeter of about eight and a half miles.

Then there are the people, thousands of them in all their astonishing and splendid diversity! There is only one common characteristic of a Glastonbury-goer - they understand that Glastonbury Festival offers them more opportunity than any other happening to have the best weekend of the year or even of a life-time, and they are determined to have it! You'll meet all kinds of people, of all ages, backgrounds, nationalities, lifestyles, faiths, concepts of fashion (or lack of it) and musical taste. Some will undoubtedly wear silly hats, or buy shirts that they'll never wear again... until next year, that is. The overall vibe of the Festival is consistently mellow and friendly, even in the event of rain and all that comes with rain, a field and thousands upon thousands of tramping fee. [Glastonburyfestivals.co.uk]