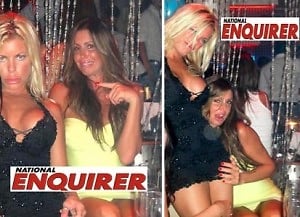 Ever since the Tiger Woods mistress shit-show exploded on us a few weeks ago, there has been a lot of talk about Rachel Uchitel's vague position as head of VIP client relations at various bottle spots between NYC and Las Vegas.  We know the language used to couch the position, but what exactly does it mean?

Well actually it's quite simple.  Uchitel has acted as chief enabler to droves of celebrities who need to set up rendezvous points with women that they can't directly speak with or pick up in a given nightclub.  The game works something like this, celebrity walks into nightclub with entourage and is placed at a table whereby they are subsequently liquored up by a "hostess" such as Uchitel.

Quenching liquid thirst, however, is only one part of the equation.  The main goal is to quench a sexual thirst, but this is a bit tricky in the age of digital and mobile cameras.  This is where the "Operations" title of Rachel's position comes into play.  In order to pick up women on the fly, high-profile people like Woods need a skilled go-between such as Uchitel to work the channels and set up the logistics of a late night hotel room encounter.

Of course!  This makes much more sense then sending some random guy of your outfit to hit on a woman by proxy.  Girls attract girls, and they are much less intimidating.  Moreover, someone like Uchitel already possesses a large harem of choice women who aren't burdened by the emotional questions of right or wrong.  Simply put, they're game.

So what have we learned?  Well for starters, clubs that want to attract a celeb heavy crowd need to hire "VIP Operations" people like Uchitel.  Secondly, someone who heads VIP Operations generally speaking is a glorified pimp.  And  lastly, Tiger needs to pay through the nose cause Rachel has names and numbers of all of his indiscretions that happened under her roof.