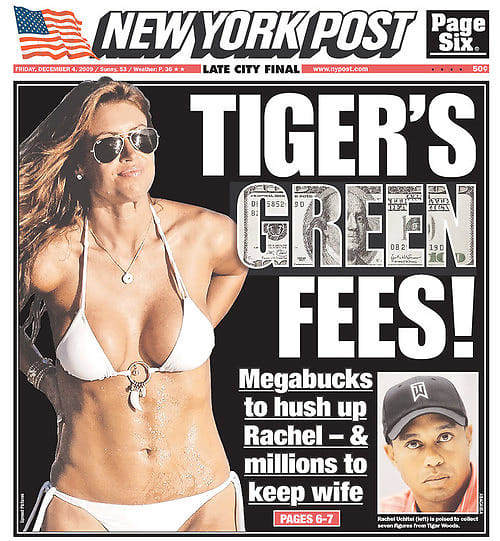 Tiger Woods knows how to play from the ruff, but he sure as heck doesn't know how to call a bluff. Why didn't his handlers see through Rachel Uchitel's transparent attempt to extract a payout via a press conference? Perhaps no one was paying attention in Game Theory class. If you evaluate the game tree of this "dilemma" the outcome is obvious.

It's clear that Uchitel would rather not come clean on her exact relationship with Woods.  Whether it's Jiminy Cricket chirping in her ear or some other motive, her choices indicate that while she does enjoy her "star-fucker" status, she does not want to trade down to "home-wrecker" status.  Therefore, she will always opt to choose a "Tell Nothing" strategy regardless of whether Tiger chooses a "Pay" or "Not Pay" strategy.

This is further proven by evaluating potential outcomes and their respective payouts.

Woods Does NOT Pay, Rachel Tells All - We have already ruled this out above.  Uchitel will not chose a "Tell All" strategy regardless of what Tiger chooses, since the net gain to her will be negative (i.e. official home-wrecker status).  Hypothetical payoff: Tiger -10 | Uchitel -10

Woods Does NOT Pay, Rachel Tells Nothing - Uchitel will naturally choose the "Tell Nothing" strategy in this case.  Even though she didn't get paid, she can still remain "fuzzy", extend her 15 minutes of fame to 20, and retain an iota of dignity without completely ruining herself.  Tiger wins hands down because allegations are never substantiated.  Hypothetical payoff: Tiger +10 | Uchitel+5

Woods Does Pay, Rachel Tells All - Impossible outcome, any payment would come with a draconian confidentiality clause.  If Uchitel did tell after the fact, she would lose all of her gains.  Hypothetical payoff: Tiger -10 | Uchitel -10

Woods Does Pay, Rachel Tells Nothing - Tiger fails to call bluff.  While he keeps the cat in the bag, rumors about hush money hurt his brand and give credence to allegations.  Uchitel wins hands down, she doesn't have to talk and gets paid.  Hypothetical payoff: Tiger +5 | Uchitel +10

Based on the above, Rachel Uchitel's payoffs are always highest with a "Tell Nothing" strategy regardless of Tiger's move.  If Tiger had evaluated the game tree, he would have concluded that his dominant strategy was "Not Pay".  That being said, all is fun in the hypothetical world.  Uchitel is repped by Gloria Allred who has a knack for working with femme fatales, and she isn't likely to miss a beat.  These scenarios also assume that Uchitel is rationale, which increasingly looks to require a suspension of disbelief.

Oh, fine enough with the mental posturing! A million dollars is a drop in the bucket to Tiger, of course he is going to pay to shut her up!  Why even come close to taking the risk?  Well played Rachel.