David Yontef, one of the contestants on Bravo's popular "Millionaire Matchmaker," says he has a little secret about the self-proclaimed millionaires on the show: they're not as rich as they claim. Eli Obus shot a video interview with him on Tuesday night that makes for a controversial unveiling.

We went to The Grace Hotel on Tuesday for the premiere of Robin Kassner's episode of "Millionaire Matchmaker," in which the so-called "plus-sized millionaire" (Patti Stanger dubs her a size 24 Jessica Simpson) courts a hunky plumber who is her junior by a decade. Cougaracity at its finest.

Kassner, an ebullient personality who founded Haute PR, seeks "a Jewish Matthew McConaughey" and flaunts the possibility of a grand life (complete with a Maserati and a Ducati)  when trying to seal the deal with the young, toilet-hugging stud. 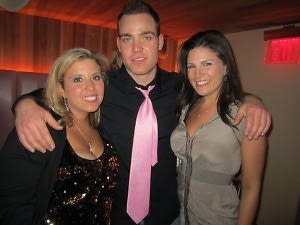 But let's turn this up a notch: Yontef claims that Kassner and half of the other contestants on the show aren't millionaires.

Yontef, CEO of Advertising Executives Inc., an executive recruitment firm for the pharmaceutical advertising industry, claims he owns a $5 million property with no mortgage and has an additional $1 million in cash.  Other contestants, he claims are not so lucky.

Known as the gay millionaire Patti found superficial (she made him walk through Times Square with pockmarks on his face to feel a judgmental gaze first hand), Yontef is a lively personality who has made a habit of pursuing reality fame (he's made it to the final round of similar Bravo shows and has his own VH1 show on the cutting room floor).

He claims that Bravo does not check bank accounts or tax returns in order to verify whether contestants are millionaires.

"I honestly think that if you portray yourself as wonderful and fabulous, and wealthy," he said."I think you could get on this show even if you are completely not a millionaire."

Yontef estimated that 50 % of the contests do not actually have $1 million, and I asked him to be more specific.

"You're really gonna go there and ask me who I don't think is a millionaire?" he yelped.

But he needed little prompting before naming Stacy Kessler, Doug Kepanis, and Jason Teich as shams.

And as for the host of that evening?

"I don't think that Robin Kassner is a millionaire at all, by any stretch of the word."

Check out Eli's video below:

Of course we reached out to Kassner for her rebuttal, and she sent along this message:

"On paper, I am a millionaire. I have a million dollars in two funds and I own my apartment with no mortgage. I don't count the value of my PR firm, Haute PR."

She acknowledges that some degree of relativity should be applied to the extent of her wealth given the extravagance of the neighbors surrounding her:

"But in reality, as you know, having a million dollars living in Manhattan does not make you rich. I am definitely pretty average for the Upper East Side. I live a fabulous lifestyle because I am a fun girl. However, I don't regularly bathe in hundred dollar bills and money up in the air a la Scrooge McDuck."

Whether there is any legitimacy to Yontef's claims remains to be seen, but he has certainly stirred up some controversy in the process.

Do you think all the contestants are worth as much as they purport?