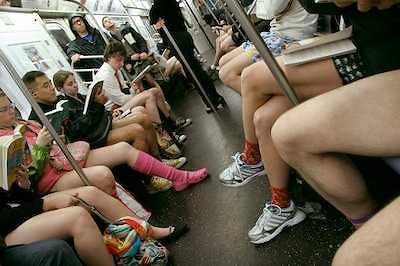 If you believe the adage there's no such thing as bad publicity, then this list of the 40 all-time best publicity stunts will impress you more than someone willing to get punched repeatedly in the face simply to appease their boss. Because that's what happens for a group of dysfunctionally loyal employees who took one for the team on camera. They're only smiling because they have great health insurance. In another vaguely self-destructive episode, Chip Wilson, the founder of athletic wear giant Lululemon, traveled in a coffin to throw his own party and race entitled "Chip's Not Dead Yet Miracle Mile." Finally, another grand highlight comes in the form of a No Pants Subway Ride courtesy of 900 "underwear enthusiasts", which pretty much speaks for itself.