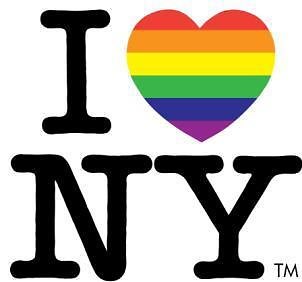 This Sunday, in what Mayor Bloomberg predicts will be a "historic and unforgettable moment", over 700 same-sex couples will wed in our great city. If you aren't among the lucky ones picked in the marriage license lottery, or are simply looking to celebrate equality without getting hitched, then take a look at some of the best ways to support our gays on their special and momentous day.

NY is the 6th (and largest) state to legalize gay marriage

The number of weddings held on Sunday will exceed the city's all-time record for marriages in a single day (previous record holder: Valentine's Day 2003)

Each City Hall ceremony is estimated to last one hour; judges will be granting licenses, approving waivers for the usual 24-hour waiting period, and performing the actual ceremonies (though couples have the option to marry outside of City Hall once having secured their marriage licenses)

There's talk of protests being arranged in some of NY's biggest cities but we know you won't let that sour your mood - or infringe on your right to partttaayyy.

In general, many New Yorkers will be partaking in the festivities: photographers, bakers, bloggers, and vendors will be tremendously busy on the big day. If your eyes are open you won't miss them scurrying about the city and will surely feel the electricity of the day.

Metro NY will be covering every City Hall ceremony within Manhattan and Brooklyn (with the couples' permission); their live blog will feature pictures, commentary, and personalized messages from family and friends. If someone you know is getting married on Sunday, be sure to post on the site!

Manhattan Mini Storage will also be covering the ceremonies at City Hall, where they'll be giving out three months of free storage to newlyweds and posting "Just Married" pictures on their Facebook and Twitter pages.

Gay Avenue Q puppets Rod and Ricky will wed at City Hall before their matinee show; footage of the union will be plentiful but we're betting their 3 p.m. performance at New World Stages will be an even bigger hit, with theatergoers coming out to further support the happy couple.

If you'd like to witness an actual wedding, head over to the Bethesda Fountain in Central Park on July 30th; at this 'Pop-Up Chapel' free weddings will be held in one of the city's most romantic spots (lucky couples will be provided with an officiant, photographer, champagne, and cupcakes!).

If nothing else, grab some drinks at your favorite gay bar or club (we like Splash, The Eagle, and Stonewall). It's guaranteed to be a party - and totally worth Monday morning's hangover.