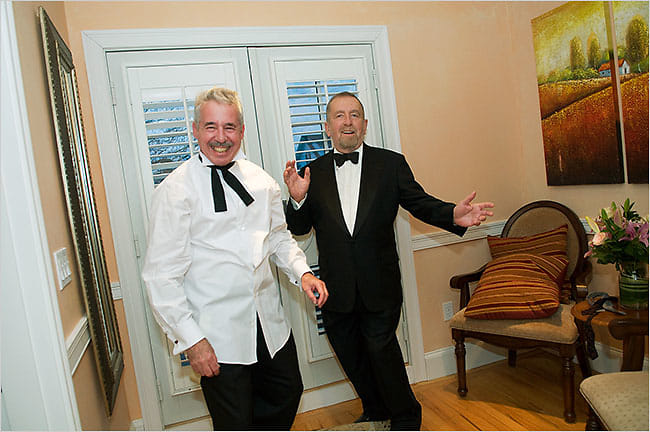 [Jeff Weinstein and John Perreault. Photo by Jodi Hilton for the NYTimes]

Let's take a look at the weddings that made the headlines this week. Do you know of a fun, interesting wedding? Drop us a line and let us know about it!

[Introducing Guest of a Guest's "The Wedding Party"]

Jeff Weinstein and John Perreault. (Pictured above) Married on December 6th.  After a 32 year long relationship, Jeff and John celebrated with a ceremony which included Walt Whitman poems and an official Justice of the Peace.  They met at a San Diego Bowling alley, though an lived an entire country apart. “When John went back to New York, something dramatic happened: I woke up one day and couldn’t see colors,” he said. “Everything was gray.” Before rushing to a hospital, he called a friend, who offered a simple diagnosis. “My friend said, ‘You’re not sick, you’re in love.’ ”  John decided to return to NYC to be with Jeff and the rest is history.

Morgan Paige and Ron Sklar: Married Sunday, December 21st.  Morgan graduated from Bucknell with an MBA from Cornell.  She is now an associate brand manager in the Chicago office of Unilever.  Ron is a second-year law student at Northwestern, he completed his undergraduate from the University of Michigan.

Arna Berke-Schlessel and Zachary Zohlman: Married Saturday, the 20th in New Haven, CT.  Arna is the manager for business development at the NYC office of Torys, a Toronto law firm.  She graduated from the University of Rochester.  Zachary is the sous-chef at the Four Seasons Hotel in NYC.