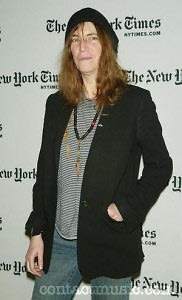 During the cocktail hour, I chatted with Patti Smith , who won later in the evening in the nonfiction category for Just Kids (Ecco), which chronicles her friendship with artist Robert Mapplethorpe. When we saw Smith recently at the premier of "The Next Three Days," she discussed the influence authors Nikolai Gogol and Mikhail Bulgakov had on her song writing, but last night we were curious which authors infiltrated her book writing style.

But Genet is such a marginalized rebel?

"It's just the manner in which he writes," she said, "where his references and his atmosphere are almost as a dark fairy tale, but there's an element of truth threading it."

I wonder whether Smith has any qualms about the changes rampant in the publishing industry and the prevelence in e-books.

But her acceptance speech revealed otherwise, as she hinted at a bit of concern.

"There is nothing more beautiful than the book," she said. "Please don't abandon the book."

When I saw Tina Brown, shortly before I spoke with Tom Wolfe I asked her how relieved she was that The Daily Beast/Newsweek merger had gone through. 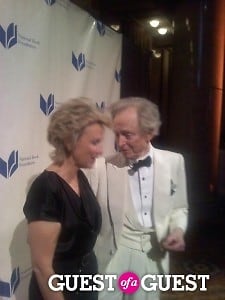 When I asked her about the next logistical hoops she would jump through, her responses came as craftily vacuous, anodyne, evasive and wouldn't elaborate specifically the manner in which Newsweek owner Sidney Harman called Barry Diller to revisit the negotiations and galvanize the deal:

"I'm just getting to know everybody, hearing, listening, meeting people," she said. "Gradually hearing from people who were there, talking to people who are already in place, you know, thinking about who I might want to bring, and so on, and so on. I just started. It's been two days, you know."

Up the staircase on the second-floor bar, I found Jonathan Safran Foer, chatting with a New York magazine writer I know and a tall gentleman. They were discussing the article about James Frey's controversial sweatshop in which he preys on young M.F.A. students and cons them into signing skimpy book contracts. The tall gentleman addressed an earlier version of this scheme several decades ago.

"How old is he now?" Foer asked of the culprit.

"Well, you see what happens..." Foer said quite morbidly and smiled.

He looked for his wife Nicole Krauss, whose novel Great House was nominated as an NBA finalist in fiction that evening.

"I'm supposed to be taking care of her," he said sheepishly. He then spotted her through the crowd immersed in conversation.

As Foer explained in The Huffington Post, his newest work is "Tree of Codes," a book that uses cut-outs from the Bruno Schulz short story "Street of Crocodiles" to create a new story. The task hinged on the confines of an already-established text without the novelistic creative freedom.

And with Foer unwilling to discuss the particulars of his new novel in-progress, we decided to cut out of the conversation and return to the bar.