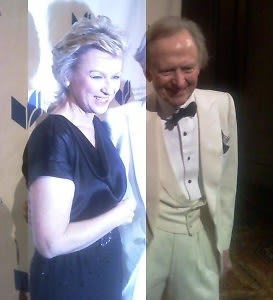 At the National Book Awards last night at Cipriani Wall Street, Tom Wolfe received the Medal for Distinguished Contributions to American Letters. Shortly after his arrival, he spoke to me about his aversion to reading on computers, his tolerance of the Kindle, and his hatred for blogs-

At the step and repeat, The Daily Beast's Tina Brown, who would present Wolfe with his award later in the evening by noting that "we read him as we watch fireworks, with wonder and joy," held onto the white-suited author with a firm grip. The two chatted for several minutes, whispering into each other's ears.

As Wolfe strolled to his table a man stopped him.

"We came down from Yale University just to say hello to you," the man said. Tom Wolfe introduced himself as Tom Wolfe, and the man said he was aware.

"My name is Edward Ball," the man said. "I teach in the English department." Then the man introduced his lady friend. "This is Candace Skorupa. She teaches in the French department there." 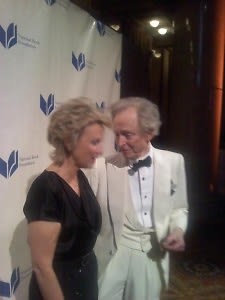 I then approached him and asked him what he thought of e-readers; he revealed that he preferred them to computers because of the limited lighting that makes reading easier on the eyes.

"The Kindle is hardly backlit at all," he said in approval of the device. "It's very hard to read much on the computer. That's why we had this mortgage scandal. The computers were responsible for the mortgage scandal. In the old days, the banks would give you mortgages; they'd bundle them and send them to the investment banking houses. And they'd look through each mortgage and, 'Ahh...it doesn't look nice," and pull the ones they didn't like. Today nobody can read that many mortgages on a back-lit screen. so nobody checks."

So with these larger ramifications from computer reading, is reading altered by a Kindle too?

"I don't think they read any differently on a Kindle," he said. "It's a clear page. You can change the type if you want."

Wolfe, a titan of the New Journalism movement known for his old-school calligraphic letters and faxes and his commitment to an old-school form of writing, can not be expected to use a Kindle himself. A greater concern of his, though, comes not in the consumption of content but in creating it.

Though Wolfe has no negative feelings about the Kindle or e-readers, he did reserve a few for blogs.

"The worst thing of all right now is you wink, blink, and the whole thing is blogs," he said. "Marshall McLuhan predicted in 1968 that television had altered the nervous systems of a whole generation. And he said it turned them tribal, and he said tribes don't believe anything has credit; they think it's a trick. They only believe rumors, and that's what the blogosphere is."

It's particularly interesting for Wolfe to lambast internet writing as conducive to rumor-mills when New Journalism stories like Nik Cohn's New York magazine piece "Tribal Rites of the New Saturday Night" (the basis for "Saturday Night Fever") set the bar for the complete fabrications and exaggerations he feels endemic to blogging.  But Wolfe was then escorted to dinner for his big evening.