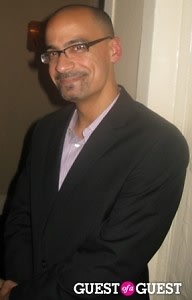 You had to hand it to Junot Diaz at the Yale Club last night. The Pulitzer Prize-winning author of The Brief Wondrous Life of Oscar Wao took decorum at a fancy fund raiser and stood it on his head. Needless to say, he veered toward the scatological.

This Literacy Champions event for The Parent-Child Home Program 2010 Inaugural Gala offered more of socialite milieu than a well-read one. As I stepped out of the elevator on the 20th floor, I immediately walked into a conversation between a gawky forty-something and Diaz; the forty-something recounted with extreme pride how he had read Diaz's last book and used the word "really" six times to describe how much he enjoyed it. The man inquired how the author brought the Oscar Wao character to fruition.

"I lived with him for a while," Diaz said.

The man took this statement literally.

Diaz explained kindly that it was a figure of speech, that he was referring to the creative process.

Then when Diaz was introduced to podium to talk about the importance of literacy, the emcee admitted to being only a third through the author's novel. It was a bit of a shafting, the emcee's introduction of the great author, whose main work he'd only perused in part. As Diaz took the stage, and I chose the filet mignon over the Chilean sea bass, I noticed that a man at my table was reading Auditing for Dummies. Actually.

The landscape looked grim from that vantage point.

Diaz then took the stage to trumpet the importance of reading.

"We know that a civic society depends deeply on a citizenry that has access to the combined knowledge," he said. "Every reader knows it's one of the few doors that allows us to travel both space and time as readily as it allows us to inhabit the hearts and minds and souls of other individuals."

In his oratory style, Diaz follows the same mixture of the sophisticated and colloquial, as he talked about the dearth of reading and the lack of funding for reading programs:

He said books allow for the practice of compassion but lamented the lack of time for quality leisure time.

"Keeping in mind our accelerated rhythm, where we're at in society, where none of you got time for nothing, I mean I'm amazed I've even got time to take a shit most days."

In light of Diaz's schedulistic problems with defecation, he praised reading's ability to slow down the pace of life:

"Reading connects you to an older rhythm. When you read a book you are momentarily transported back to a human rhythm, a rhythm that is not determined by machines, a rhythm of human thoughts, and human ideas, human deliberations, and human troubles."

When we caught up with Diaz after his speech, we wondered whether he might have any aversion to e-readers which combine the sped-up pace of the tech world with the more moderate pace of reading:

"It's not up to me to get worked up about how someone else wants to read," he said. "My whole thing is simply that I'm interested in how this will lead to either a further disenfranchisement of artists' rights or the further diminishment of the ability for writers to live some kind of life off of their work. Those are my chief concerns. This means with every new form that the word is delivered, we've got to do all sorts of work to maintain, in many ways to maintain the ability of writers to write."

Diaz, though, is not focused on the financial concerns of future writers; he's at work on a new project about which he remained pretty mum.

"I'm trying to do something completely different," he said.

That doesn't mean he would diverge from having Dominican characters, to be sure:

So who will be the publisher for the celebrated author's new work?

He doesn't get an advance?

"Cause I want to finish it."

And he went out down the elevator and into the rainy night, presumably to chip away toward finishing it.