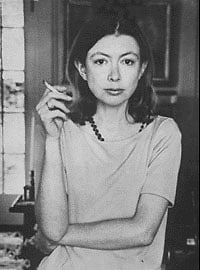 When we caught up with New Journalism icon Joan Didion at yesterday's luncheon at the 21 Club for "The King's Speech," she had a few words for us about this so-called blogging fad.

This giant figure in non-fiction whose Slouching Towards Bethlehem has a set place on any writer's shelf described for us a little bit of confusion she's had with web writing--a medium that differs from her painstaking, deliberate mot-juste craft.

"Well, I don't really understand blogging," she said. "It seems like writing, except quicker. I mean, I'm not actually looking for that instant feedback."

She views the lack of literary preponderance in blogging as the result of a tendency toward an instant-gratification teleology--a situation that brings her discomfort.

"It makes me uncomfortable," she said. "It's an entirely different impulse, I guess. It's like talking."

Blogging she reasoned mirrors talking in that there isn't the concern with the particulars of language, the meticulous editing she finds in her own craft. In an age of e-books and any number of electronic reading devices now a mainstay on any subway ride, Didion feels a bit removed from that whole movement. Why doesn't she use a Kindle?

"It's one more thing to carry around." She said her brother visited her this summer from California and shocked her when she caught him using the device. "They apparently work for people," she noted with aplomb. 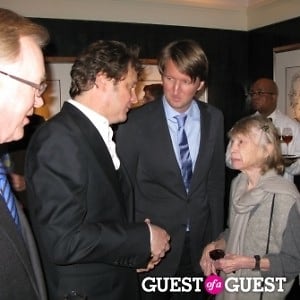 Didion just finished a non-fiction book called Blue Nights, a memoir that Knopf will publish next year that addresses getting older.

How has aging been for her?

Didion, whose husband John Gregory Dunne died in 2003, has been confronting the concept of aging and loneliness in her work since The Year of Magical Thinking, which examined her new state as a widow.  But when asking about her grace as a septuagenarian and her continued output of work, she deflected any encouragement by noting that she expected as much.

"It never crossed my mind that I would not," she said and meandered back into the thick of the party.