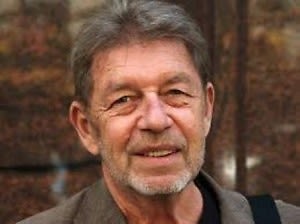 Last week stalwart New York journalist Pete Hamill won the prestigious Louis Auchincloss Prize, presented by the Museum of the City of New York. Today he answered our questions pertaining to the writing life and this fair city.

Born in Park Slope in 1935, Hamill became a hard-nosed journalist in the 60s, eventually rising to  editor-in-chief of the New York Post and the New York Daily News in separate stints. A prominent magazine journalist and author of numerous books, including eight novels, Hamill has a unique perspective on the changes in the writing landscape within this metropolis.

GofG: In the changing scope of the publishing industry, do you have a natural aversion to e-books compared to glue-and-paper books?

PH: I wouldn't call it a "natural" aversion. It's more likely to be simply generational. I don't spend much time reading online. If something interests me, I print it out, and read it later. I do love books: the feel of them, the aroma of them (if they are old), the sense of a thing with a cover, resembling a door, and how, when I open that door, I enter another world.

GofG: What's missing about the old New York and has the city become less edgy?

PH:There are many things missing from the old New York, starting with old New Yorkers. That is, people shaped by the Great Depression, people for whom the unforgivable sin was self-pity, people who would help others through hard times. I'm not sure what's meant by "edgy.".But I have no nostalgia for the time of the junkies, after heroin arrived, or the crack era, when various knuckleheads were killing each other over control of street corners. The city (not just Manhattan) has become less affordable, of course, which means we are losing all those young artists, dancers, poets, musicians who added so much richness to our lives.

GofG: Journalism these days often focuses on an instant-gratification style where speed (whether through Tweets or real-time blogging) is valued over thorough analysis and depth. How do you react to this trend?

PH: I think it's a stage, and will change. The journalistic Web will certainly get more professional, with real editors and real pay. Journalism is not a hobby. The Daily Beast, the Huffington Post, GlobalPost. com (for foreign news) are showing the possibilities. The gadgets will keep evolving, I suppose, but I can't imagine Murray Kempton, H.L. Mencken or Red Smith sending Tweets. I don't spend much time looking at blogs (I've only read Moby Dick once) , but too many of those that I've seen are actually just a form of therapy. Most of the sites are, to me, too specialized: all politics or all sports, or all gossip. There is very little serendipity. But in general, I'm optimistic about the future. The youngsters I meet at NYU have true passion. They want to do good, solid, reported work. I think they will get the chance. Soon.

GofG: What is your writing routine these days, and where in New York is your favorite writing environment or place?

PH: I start writing every morning after breakfast. At home. But my writing brain is working all day long, except while deep into a late afternoon nap. When I'm wandering the parish, or shopping, or having lunch somewhere, I try to stay alert and carry index cards for making notes. If I feel that I've been slothful that day, I punish myself (and my wife) by watching a Knicks game. I yell at the screen, and at myself, the commandment of S. Beckett: "Fail better...."

GofG: What are you currently working on, and can you describe the project?

PH: I've finished a novel called Tabloid City that will be published by Little Brown in May. The galleys arrived this morning, so I will go over them word-by-word for as many days as are necessary. I'm also gathering material for my next book.

GofG: What is the ultimate goal of your literary career--entertainment, edification, immortality...?

The personal goal is to live a fully conscious life. At 75, I've already had a long run, but there are books I still want to write, to say something about humans, one at a time. The great abstractions (or ambitions), including immortality, are beyond me. If a writer sits down to a blank screen or page, and says: onward to immortality, he or she will never write a sentence. Or if they do manage a few pages, they will be rubbish.