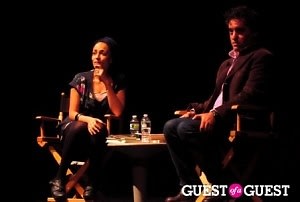 It was on Capri that novelists Zadie Smith and Nathan Englander first met, they confessed this Thursday evening. The Mediterranean rendezvous came at a literary festival where Englander said he wore a tankini and discussed everything but writing with Smith and his contemporaries.

But last week during a Matawi benefit at SVA, the two took to the stage (in a conversation that at least beat Steve Martin's 92nd Street Y performance) to discuss the difficulty of the writing life in an ever-changing technological world. They also bonded over their fondness of using the third person past.

“I made a thesis on Zadie just for tonight,” Englander bluffed, as he clutched Smith’s most recent book of essays, Changing My Mind.

With him he had a list of topics he hoped to discuss with Smith and excitedly rattled them off before catching his breath in jocular manner, saying, “I’m going to go through all my questions without you answering them, so this should only take 17 minutes.”

The two sat side by side: Englander sans tankini but with a light purple gingham button-down and a brown blazer, Smith in a dark blue head-wrap and a floral print dress. 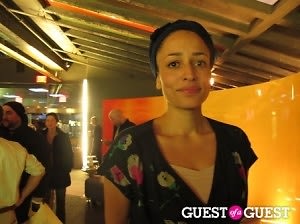 On the topic of avoiding writing, Smith recalled the literary festival in Capri where she first met David Foster Wallace.

“I was scared the whole time. I was awed by him," she said. "There are some people I admire so much I can’t talk to them.”

Instead of discussing their craft, she recalled, Wallace talked about other important issues:

“He once asked me about black hair and how it works. That remained our only serious talk.”

Smith and Englander’s discussion focused heavily on the process of writing and the contemporary conception of the writer. Smith said there is often a notion that writers must put their craft first and all other aspects of their life second--something she can’t see herself ever doing but fears may be inevitable. Another conflict for writers, the two said, is the increasing presence of technology as a distraction. Smith said she often feels the need to check her text messages now while writing:

“And that frightens me. I’m a grown woman and I should be able to control myself.”

Englander suggested that we all have the potential to be geniuses if only we had the patience. But instead we find ourselves distracted by Gawker and Twitter. The two, however, have nothing against inventions like the Kindle or iPad, arguing the platform for reading a novel matters not. 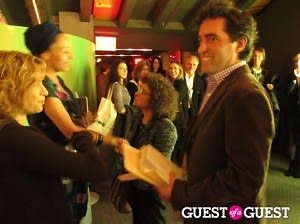 For Englander, who became a novelist as a means to escape the Jewish bubble of his Long Island upbringing, writing is “the most subversive, wonderful form in the universe,” but later had no qualms about the possible eradication of writing as we know it by newer, tech-savvy platforms:

“If the form is supposed to die, then let it die.”