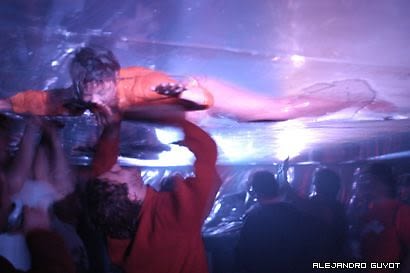 Last night we finally went to Fuerzabruta, the unique production by Argentinian Diqui James of "De La Guarda". After reading about this show in the Times back in August, we decided we wanted to check it out, and we are glad we actually followed through last night. Fuerzabruta is a "wordless fushion of physical and visual feats"...what this really means is that it is 70 minutes of non-stop stimulation similar to being fucked up on drugs. For those spectators that actually were high on something, we have no idea what kind of world they could have possibly been going on in their heads during this show. It was a pretty intense one for us stone sober.

Diqui James along with musical composer Gaby Kerpel wanted to create a "new project with the objective to create a company that continues the creative search of motivation and innovation." One in which "The public doesn't take part, they form part. Injured. Celebrating."

"We want to break intellectual submission of the language."

What this translates to is a lot of fucked up dance moves, thumping techno music, and crazy ass props surrounding you that leaves you wondering just what drugs these two were to come up with something like this. We felt like we were in a scene from Minority Report. When walking home we discussed what the meaning behind the different scenes were throughout the show. The struggles against life? Against our own Humanity? Individuals banding together to overcome the forces of nature? You can imagine how dumb we felt when we read this morning on the website from the creaters themselves that "No one knows the meaning of the work because it doesn't have one. A door is a door. It doesn't mean more or less than that."

Wow, so the work has no meaning. This explains why the best audience members were the sweaty tweenagers in all their glory. Braced-faces and awkward conversations surrounded us. The few "real adults" there stood on the outer edges of the circle by us, mostly annoyed by the forced moving of the crowd, though satisfied at times by the display. Our favorite part was of course the water scene in which a huge mylar pool ascends down on you and female dancers move about above. You have to watch the youtube we found on it:

The teenage boys no doubt especially enjoyed these scenes that left little to the imagination. For all things Fuerzabruta go here...also, we recommend a couple of cocktails or whatever other poison of your choice before going. This is a show that the broadway strike will not affect so it could be perfect for your visiting parents this holiday season. You may just want to check it out first to make sure they are the kinds of older set that would enjoy this sort of thing. It could be just the thing to bring them back to their own old club days.