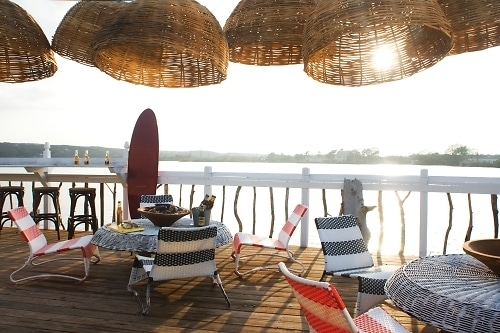 Most establishments in the Hamptons seem to fall into one of two categories: old, small, and humble, or new, sprawling, and ostentatious. What then, do we make of Montauk's Surf Lodge, which opens shop this friday? It's a new venture, sure, but it's relatively cozy (32 individually decorated rooms), with tastefully, and playfully nautical appointments. It's got three bars (the Den, the Bar, and the Deck) and, best of all, Punch exec chef, Top Chef finalist, and winner of Glad's Steamiest Chef contest, Sam Talbot in its local produce-filled kitchen.

Eager to get some insight into what promises to be the newest member of the Hamptons hotspot coterie, we give Talbot a call.... 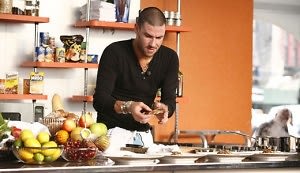 In the back and foreground, I can hear flurries of hammering, interspersed with cries for nails. Talbot seems totally unfazed by the pandemonium, cheerfully exchanging greetings with passersby in between questions. "I'm really excited to be out here," he enthuses, and he seems to mean it. "I've fallen in love with it...I'm happier when I'm in the ocean, near the ocean. I'm happiest when I'm fishing."

There is ample evidence of Talbot's pescaphilia on the Surf Lodge menu, via the nets and traps of Montauk's fishermen. Maintaining "relationships with all the purveyors" is an integral component of the SL philosophy.

Geographically and gastronomically speaking, SL is a definite change for the 29 year-old North Carolinian, who previously helmed Punch's eclectic American range in Manhattan. While the food will still be American, it's going to be simpler, spotlighting the quality of the ingredients. "We're doing sustainable, local seafood and produce. It has a cool organic vibe."

Talbot is big on vibes, and good ones abound between himself and his fellow Lodgers, Cain team Jamie Mulholland, Jayma Cardoso, and Robert McKinley, between him and TC champ and judge Harold Dieterle and Tom Coliccio, with whom he partook in this year's Naples Winter Wine Challenge, and in the moisture-free breezes of Taos, NM (Talbot took a culinary road trip across the United States last year, and was particularly taken with Taos, a "funky little town" where "you can feel the synergy in the air.").

Talbot got his kitchen itchings as a boy, watching his mother cook. Diagnosed with type 1 diabetes as a young teenager forced him to be aware of what he was eating, and of the ways food worked. He started cooking at home, and took a dishwashing job at a local restaurant, followed by a stint as a prep and product cook at Dean and Deluca, where he spent his first paycheck on a vintage Larousse Gastronomique. Multiple thumbings through the 2,000 page compendium, and "I realized I could really do this, could make career out of it."

After graduating from prestigious culinary school Johnson and Wales, Talbot came to NYC, where he worked for Williamsburgh Cafe before crossing the bridge to take the reins at Punch. After Punch came Top Chef -- where"I learned how to take criticism," though his cooking skills emerged unaltered. And after Top Chef? There was that road trip, a slew of private gigs (Apple Martin's b-day!), appearances, and almosts (Spitzer's Corner, we wish we knew ye), before MCM Hospitality proposed an marine interlude. While it's possible for a restaurant that's a component of a larger enterprise to be overshadowed, Talbot believes the "food will speak for itself. We're looking at Surf Lodge as a whole. It's our baby and we're excited to watch it grow."

Us too, chef. Even if we have to schlep our grumbling stomachs all the way to Montauk to do so.