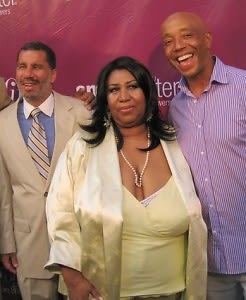 Russell Simmons' Art for Life benefit earns him face (and photog) time with the Queen of Soul and a philandering govna, and the Queen is. not. pleased. [Hangin' in the Hamptons]

Neither is this guy. I guess he won't be E.A.T.ing anytime soon. [Hamptons.com]

The Hamptons get a baseball team. Apparently they're not bad, and Seinfeld is helping bankroll. [Newsday]