Not to make light of the situations in Libya, New Zealand, etc, but how can I possibly focus on the real news today when I have items like the Girl Scouts discovering how to charge customers on their iPhones, Ivanka Trump having a baby girl, and the announcement that hair turbans are the next big thing?!

On the Libyan protests: "It is obvious that this is run by al-Qaida." [USA]

The Qad Libs. This is GREAT! Libyan dictator Muammar Qaddafi's rambling rants are now fully customizable. Create a realistic hard-line speech by inserting your own bizarre words into his actual defiant address. [VF] 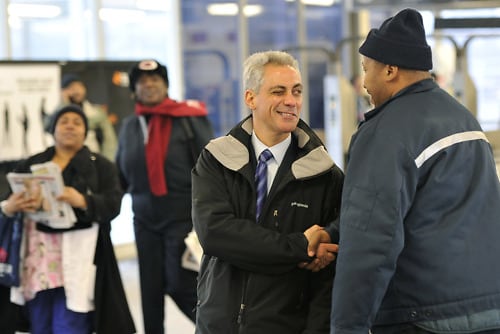 3. Obama is really getting into this Internet thing. The President just named Facebook COO Sheryl Sandberg, VC John Doerr, and Comcast CE Brian Roberts to his council on jobs and competitiveness, highlighting the administration's emphasis on high-tech and media firms to help shape economic policy. Check out the seven other members. [WaPo]

Oh, and btw, POTUS is coming to SXSW this year. Totally no big deal. (NOT!) [Portfolio via SarahCooley]

4. If they did a remake of Troop Beverly Hills (one of my all time favs), all of Phyllis's girls would be holding iPods and charging their buyers via the Intuit GoPayment App, like these girls in Ohio: [Cleveland.com] 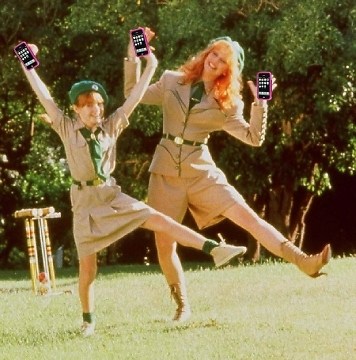 5. The Onion article on the "Man who temporarily disables Facebook Account deems self "off the grid""is funny. [Onion]

6. Ivanka Trump is having a girl. In other news, The Daily just broke a HUGE story. Sort of. [TheDaily] 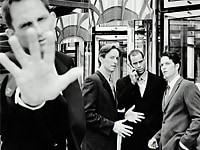 7. The 25 Guys to Avoid on Wall Street. Omg this is so crazy true. Kudos to Bennington and Carney. Here's #1: "Avoid the guy that calls you "Chief." He doesn't remember your name." [CNBC]

8. Jen Brill, the fashionable New Yorker and ex to Terry Richardson, has created these cool Chanel Stickers for "Make It Snappy." [OpeningCeremony]

9. Stanley's not much of a shopper, and is totes fine with being left outside on the streets of Nolita to do some bitch scouting. Furthermore he would NEVER be a self-described "service dog," that would imply that he would actually have to provide some kind of service to someone. So. These fake "service dog" vests are not for him. But apparently, they are all the rage in dog land. [WSJ]

10. Badoo is the biggest startup you've never heard of. The UK based online flirting/dating service has passed 108 million registered users. Find out what you've been missing out on here: [SAI]

11. What your favorite classic rock band says about you. This is good. [McSweeneys]

12. The lost art of pickpocketing. The venerable crime has all but disappeared in the U.S. What happened, and should we miss it? [Slate]

13. I've always loved these old photos from the 1949 issue of LIFE Magazine of Picasso painting with light. Today, they're back on my radar. [Luxuryspot] 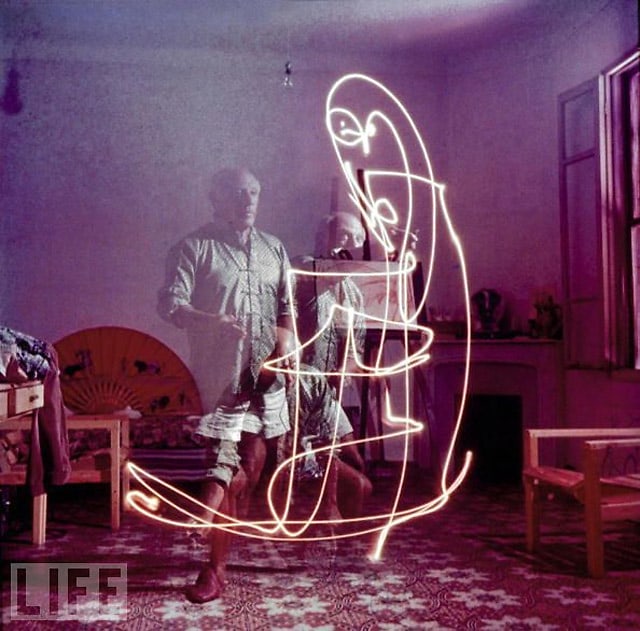 14. Bummer. I'm not going to be able to read "The Daily" from my desktop anymore. In "How I Indexed the Daily," Andy Baio says: "For the last three weeks, I've indexed The Daily. Now that my free trial's up, I've had an intimate look at what they have to offer and, sad to say, I don't plan on subscribing. As a result, I'm ending The Daily: Indexed, my unofficial table of contents for every article they published publicly." [WAXY] 15. Why save PBS? There are tons of reasons (click on photo at left). I love this one: Children who watched Sesame Street in Pre-school spend more time reading for fun in high school and obtain higher grades in English, Math, and Science. [Newsweek]

Then, check out Fred Rogers defending public broadcasting in 1969. [ChiaraAtik]

16. Oscar Favorites: Who's Ahead? Thousands of NYTimes.com users connected with Fbook and cast their votes. Check out the movies they picked for best picture, which movies they tended to "like" on Fbook and the breakdown across demographic groups. [NYT]

17. On Piers Morgan last night, Larry King returned to his old CNN stomping ground, where he joked about a 2009 interview during which Muammar Gaddafi insisted on changing the seating arrangement. [DailyBeast]

18. An offensive abortion billboard appears in Soho and everyone gets the date wrong. In other news, citizen journalism is alive and well. [NYCtheBlog]

19. Love and Lobsters: The Must-Have List aka the "dealbreakers." Love this post by Joy Engel for [HowAboutWe] Speaking of dealbreakers. Do you guys remember the Puka Shell necklaces? Heh. [Dealbreaker]

20. Prince William's bachelor party is going to be an epic sea voyage according to the UK Sun. The royal brothers will bid farewell to William's bachelorhood with speedboats, surfing and waterskiing. [Windsorknot] 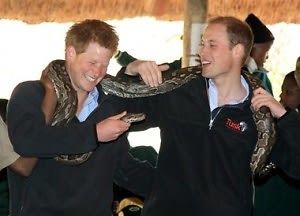 21. The Black Swan Diet will NOT make you look like Natalie Portman. [Gawker]

22. The Midwestyle. I am OBSESSED with this blog that I found off Cary's Tweet. Read their "Who We Are:"

We're a few young men born and raised in the Midwest. We don't have time shares, trust funds or family businesses. We grew up on family farms, state fairs and special trips to "the city." We grew up with fields down the street and with the general store a bike ride away. We grew up buying a size bigger than we needed because "you're gonna grow into it." We don't drive beamers, benz or gwagons. We have blue collar roots and an appreciation for good, hard work. We know the value of a dollar, and most of the time, we work hard for that dollar. We know how to look sharp on a budget and even when to splurge on a great piece.

23. Today marks the start of the Food Networks South Beach Wine & Food Festival, or "Sobe" as folks like Lockhart call it. [Eater] 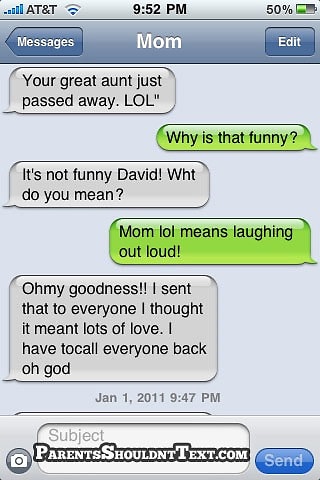 25. A solid list of a handful of writers to rely on for "instruction, for enlightenment, or just for laughs." [MattLanger]

26. This James Franco Bingo that Vanity Fair created for the Oscars is pretty hilarious. I like the square "Publicly self identify as a lost Winklvi twin." [VF] 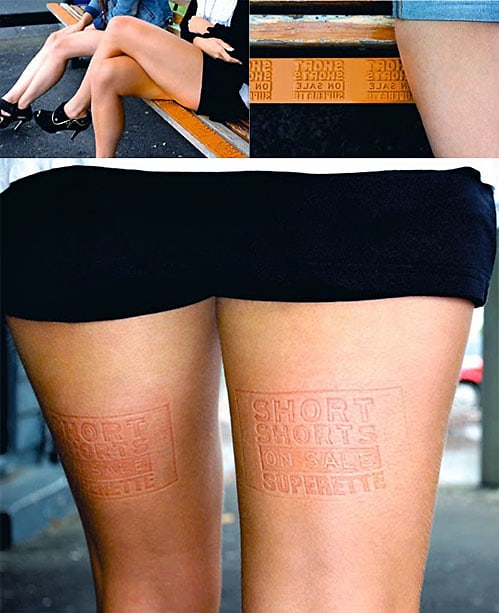 29. The 10 best abused artworks ever. [Flavorwire]

30. Hair Turbans. WTF is this? What is going on? [TodayShow] 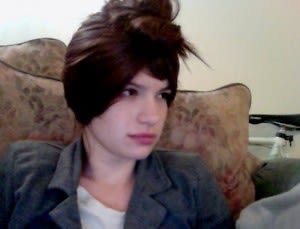 31. Check out the first page of a handwritten draft of Infinite Jest. [McNallyJackson]

32. The $200 Microhouse (left) built by Derek Diedricksen out of junk is perfect for NYC. "For ingenuity, thrift and charm, Mr. Diedricksen’s tiny structures are hard to beat. Made of scavenged materials, they cost on average less than $200 to build. They often have transparent roofing, which allows a fine view of the treetops, particularly in the smallest ones, where the most comfortable position is supine." [NYT]

33. Dave Eggars interviewing David Foster Wallace. In case, you know, you're into this kind of stuff, go read this interview from 2003, up now at [Believermag]

34. Finally, leaving you with this photo of rural Indian villagers learning by lantern light at a government subsidized night school in India in 1953. It's from the LIFE Magazine Photo Archive and it's stunning. [Becauseimaddicted]

Well, that's all for me today. Do you have something for tomorrow's reading list? Email me: Rachelle@guestofaguest.com!