Jon Stewart interviews the president, Bill Gates visits Facebook and apparently it's time for me to freeze my eggs. Is it opposite day? Anyway, check out what I'm reading today...

1. President Obama on The Daily Show. Last night, Jon Stewart welcomed our President on air for a 30-minute interview. The reviews of it are scattered, and I suggest you watch these clips and formulate your own opinions. [Gawker.tv]. That being said, here are a couple of quotes to pick out: 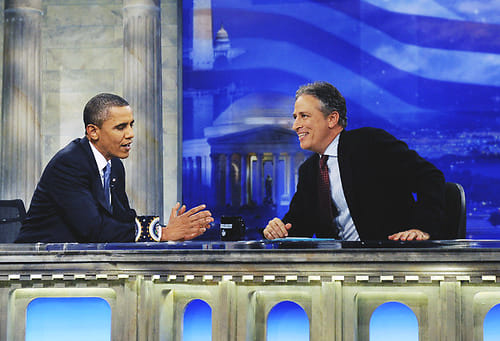 "Is the difficulty that you have here the distance between what you ran on and what you delivered?" -Stewart

"Larry Summers did a hell of a job. … pun intended." -Obama

I also love this gift that Stewart presented to the President: 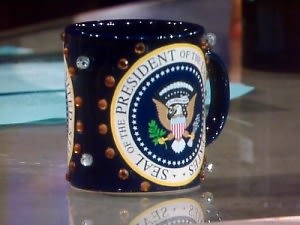 ["Mug Force One" via InOtherNews]

2. Facebook has Bill Gates, but Google has servants! Microsoft chairman and billionaire Bill Gates stopped by the Facebook offices randomly yesterday to speak to employees. But, Google is providing it's staff with credits on TaskRabit, a site that brokers odd jobs, like picking up laundry and cooking dinner. +1 Google.

3. 10 NYC Hotels better fitted for Charlie Sheen to do blow in than the Plaza. [Village Voice]

4. NYC had the highest Twitter score of all cities, but San Fran is the #1 "Social City." Check out this article on how social media isn't really "redefining our landscape of everything we do" in the ways we think it is. [The Atlantic] 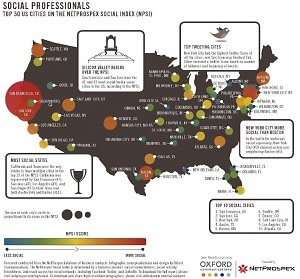 5. NYC Marathon. Are you running? Know a friend that is? Well, if you need a bandwagon to jump onto, why not support our buddies: FourSquare founders Dennis Crowley and Naveen Selvadurai are running for a cause. [Naveen]

"But this time, the bailout will be more subtle because the regulators don’t have to come up with cash. They just have to persuade a few judges to bend the rules a little bit while the banks foreclose on people’s homes." Yikes. [Politico]

8. Did you guys spot the Double Rainbows above the Lower East Side yesterday? Most bloggers took notice, and took out their camera phones. [BoweryBoogie] 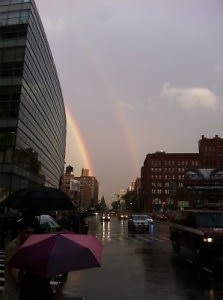 9. Procrastination. "Many studies over the years have shown you tend to have time-inconsistent preferences. When asked if you would rather have fruit or cake one week from now, you will usually say fruit. A week later when the slice of German chocolate and the apple are offered, you are statistically more likely to go for the cake." [You are not so Smart]

10. Women should start freezing their ovaries in their twenties. [The Independent]

12. Lure Fishbar. They are the latest on our Tumblr radar (do you not HAVE a tumblr yet?!-you're really far behind on the uber cool trend). Anyway doesn't this look good meat lovers? [LureFishbar] 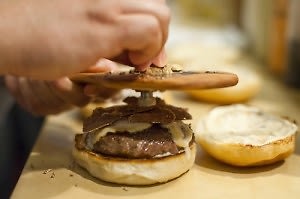 [Item of the week: Ok, it’s not at Lure but our newly opened B&B, however, with such a short seasonal life for white truffles we could not keep it quiet. Shaved Piedmont truffles, Robiola cheese and truffle aioli.]

Guess who else is on Tumblr? The New York Public Library! [NYPL Wire]

13. Bnter (pronounced "banter"). The co-founder of "Texts from last night" has teamed up with illustrator/designer Patrick Moberg to release this new website yesterday. 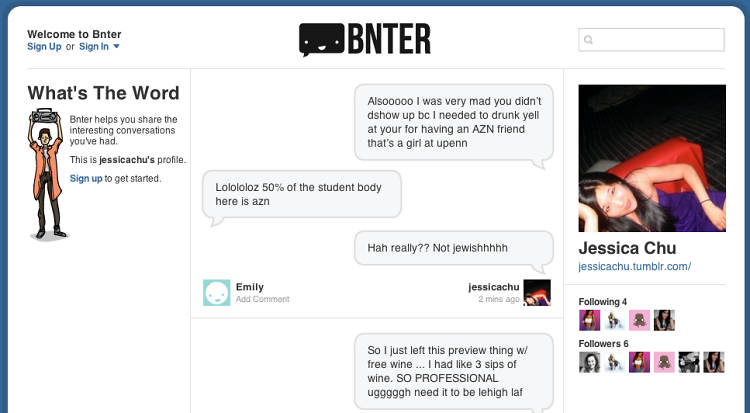 "Basically, people can share and post their favorite text message and BBM conversations in a really cute iPhone/iChat bubble format. I attempted to use Bnter and although it's a fun and interesting idea, two simple issues and concerns came up when I was playing around with the site." [Jessica Chu]

14. Words that don't exist in the English language. I know I have posted on this before, but here's another fun one to look at. I love the "l'esprit de escalier." [Blackbook Tumblr]

15. Nordstrom is coming to Soho! Well THIS is really some exciting news isn't it? Note, it won't be operating at all under the name and "From the customer's view, there will be literally no tie-in to Nordstrom." Mysterious. Still, very excited about this new, "completely unique" store set to open at 350 West Broadway next year. [NYP]

16. Twitter is place to gripe. Airlines looking for how many followers you have on Twitter and more likely to respond to your complaint if they know that you are influential online. [WSJ]

17. Fashion Folk tell the NYTimes what they are going to be for Halloween: [NYT] 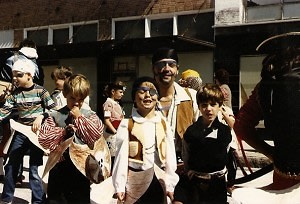 The designer Eddie Borgo dressed as a pirate at age 6 in 1984.

Remember these? Scary Stories to tell in the Dark by Alvin Schwartz [Cary Randolph] 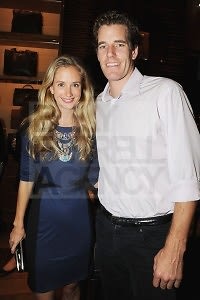 18. About last night. Cameron Winklevoss (my partner in GofG) was here on back-to-back business meetings all day. We did somehow manage to make it uptown and stop by the Tod's Event at Barneys. Thanks to Jay Godfrey for dress and Dannijo for necklace!

19. Finally, please help me officially welcome Ross Kenneth Urken to the GofG team! The writer out of Princeton already has Wendi Murdoch and Ivanka Trump interviews up on the site today. We are excited to see what comes out of him in the coming months! [Ross Kenneth Urken]

That's all for me today. Do you have something that I should include in tomorrow's reading list? Email me! Rachelle@guestofaguest.com with READING LIST in the subject line!